Theodore Roosevelt and the 1912 presidential campain

Theodore Roosevelt and the 1912 Election

Students learn about Theodore Roosevelt the man and his 1912 third party campaign for president. 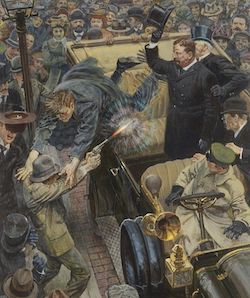 In this teaching module from the Shapell Manuscript Foundation in collaboration with the Roy Rosenzweig Center for History and New Mediastudents learn how to examine engaging primary sources that surround the dramatic 1912 presidential campaign in which Roosevelt ran as a third party candidate after having served as president from 1901 to 1909. During the campaign Roosevelt was the victim of an assassination attempt while speaking in Milwaukee and several of the documents relate to this event and how it affected Roosevelt and the campaign.

Students work in small groups to analyze sources to better understand Theodore Roosevelt, the person, and the issues that most concerned Americans during the 1912 campaign. Primary sources include letters from Roosevelt providing an account of his assassination and an update on his recovery. Other sources relate to the campaign itself and the Bull Moose or Progressive Party that Roosevelt ran under. Students are also encouraged to think through how Roosevelt's personality made him an attractive candidate.

After analyzing these primary sources students work in groups to create their own campaign materials for Roosevelt. Teachers have the option of having students create physical posters or pamphlets or to have students use digital tools to create their promotional materials. The modules also contain guidance on differentiation for diverse learners and connections to standards.