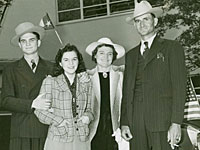 Who was the Typical American Family of the 1930s?

The Leathers family of Clarendon, Texas.

At least that was the conclusion of a panel of judges enlisted by the New York World’s Fair Corporation to make the choice out of forty-six families who had been selected by local newspapers across the United States as “typical” in their area. The contest was a promotional effort by the World’s Fair, which was in its second season. As research by Jon Zachman shows, the families chosen hardly represented a cross-section of America. None, for example, were African Americans; the largest group of winners by far were white, Anglo-Saxon Protestants. Moreover, the ground rules of the contest mandated a very traditional notion of “family” as a nuclear family with two parents, headed by a male breadwinner.

Whatever the obvious biases of the contest and the selection process, the quest for the “average family” was itself quite representative of 1930s American culture. As historian Warren Susman points out, the thirties were the heyday of the notion of “the people,” which suggested “that a basic unity underpinned the social and culture structure of America.” Out of the quest for “the people”—the single voice that united American society—came the birth of “the concept of the average,” what Susman calls “a kind of statistical accounting of the people seen as a unit.” Whereas American culture had previously venerated individualism, it now celebrated the Average American and the Average American Family. This search for the average American reflects a deeply conservative impulse within a decade that is often mistakenly seen as largely radical—a “red decade,” as it is sometimes called.

And what were the “average” Leathers like? Mr. Leathers was a thirty-nine-year-old stock farmer; Mrs. Leathers was a thirty-eight-year-old housewife. Both were Baptists of English descent. Their teenage son, Johnny, was president of the 4-H Club; their sixteen-year-old daughter, Margaret Jean, belonged to the Pep Squad as well as the Home Making and Natural Music clubs. Mr. Leathers’s ambition was “to become a more useful citizen and raise more and better Hereford cattle.” His wife wanted “to give my children the very best education possible and teach them to be good American citizens.” At the end of a decade of great social turmoil, what could be more reassuring than to consider the Leathers as the average American family.

Warren Susman, Culture as History: The Transformation of American Society in the Twentieth Century. Pantheon Books, 1984.