Central Question: Was economic difference—manufacturing in the North and slave-driven agriculture in the South—the primary cause of the Civil War?

Textbooks have traditionally taught that incompatibility between northern and southern economies caused the Civil War. Everything else was tied to that economic difference, anchored by cotton.

The Civil War was fought for many reasons, not solely or even primarily because of the growing importance of cotton on southern farms. Moving away from economic differences and cotton as simplistic causes leads to a more accurate, and far more interesting, understanding of the causes of the Civil War.

Census data from 1860 shows farms, manufacturing, and cities in the North and the South, as well as the location of slaves and cotton in southern states, all of which challenge the notion of a purely agricultural South and industrialized North. 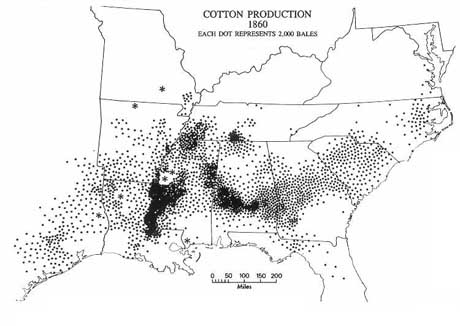 For years, textbook authors have contended that economic difference between North and South was the primary cause of the Civil War. The northern economy relied on manufacturing and the agricultural southern economy depended on the production of cotton. The desire of southerners for unpaid workers to pick the valuable cotton strengthened their need for slavery. The industrial revolution in the North did not require slave labor and so people there opposed it. The clash brought on the war.

Economic divergence is certainly one of the reasons for the Civil War, but neither the major one nor the only one. Many factors brought about the war. Focusing only on different economies would be like arguing that one professional football team will always win because it has taller players.

The true causes of the Civil War are downright intriguing and just as complex as the conflict itself.

Women in Journalism
River of Song
Give Me (Nuclear) Shelter
Tangled Roots
National Park Service: Links to the Past
Recipe for Victory: Food and Cooking in Wartime