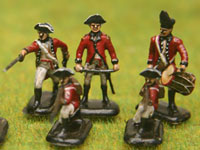 Why did armies, during the American Revolution and at other times, fight with lines of men standing near each other? Why did they not simply fight from behind cover?

The use of linear formations in European army infantries was one element of what military historians have called the "Military Revolution," though they have disagreed on the period within early modern history—the Hundred Years' War (13371453), 15501660, or 16601720—during which the tactic became most significant.

In linear formations, infantry troops, armed beginning in the late 17th century with bayoneted flintlock muskets, marched in columns until they were ordered by commanders to form lines, usually three-to-five men in depth, and charge enemy targets while firing in unison. The tactic did not require skilled marksmanship or out-of-the-ordinary heroics, but relied instead on well-drilled and disciplined soldiers delivering massive amounts of firepower.

Line charges, especially when accompanied by artillery fire that arrived at enemy lines just as the advancing soldiers came into firing range, could be decisive in battle. Defending armies, arranged in similarly cohesive lines, could respond with corresponding volleys of ammunition and fend off larger forces. Army size was greatly increased due to the institutionalization of linear formations within a framework of centralized bureaucratic organization, as was the impact of the military on societies.

Historian Guy Chet has discredited a popular "Americanization thesis" that attributed colonists in militias during the late 17th and early 18th centuries with adopting guerrilla warfare tactics learned in battles with Indians as more appropriate than linear formations for fighting in wilderness terrains. Chet finds a lack of evidence for the claim and maintains that contrary to popular belief, the initial victories of American forces in the first battles of the War of Independence were not due to so-called American tactics, but from the failure of the British forces to adhere to established tactics and strategies.

While guerrilla warfare did break out in the backcountry of the South during the final year of the Revolutionary War, both sides for the most part engaged in battles fought according to tactics developed during the Military Revolution.

Guy Chet, Conquering the American Wilderness: The Triumph of European Warfare in the Colonial Northeast. Amherst and Boston: University of Massachusetts Press, 2003.