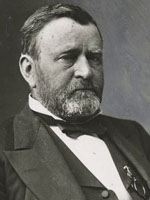 When was the number of Supreme Court Justices expanded to nine, and what was the reason? Why wasn't there a large public uproar like the one FDR experienced?

On April 10, 1869, Congress passed an act to amend the judicial system in part by increasing the number of Supreme Court justices to nine, to take effect the first Monday in December of that year. That act, which remains in effect to this day, by itself did not provoke a public outcry. A mostly partisan-based controversy did arise, however, when the votes of two new justices nominated by President Ulysses S. Grant in February 1870 and confirmed by the Senate resulted in the overturning of a recent politically divisive court decision.

Grant was accused with packing the court, the same charge leveled against FDR in 1937 when he put forth a plan to reform a Supreme Court that repeatedly had judged key New Deal and state reform legislation to be unconstitutional. Roosevelt proposed giving the President the opportunity to nominate one new justice to the Court whenever a sitting justice who had been on the Court for at least 10 years and had not retired within six months of turning 70 years of age—the average age of the justices at the time was 71—with a maximum total of six such appointments to be allowed. In a fireside chat in March, Roosevelt cited as precedent a bill passed by the House of Representatives in March 1869 that had proposed adding a justice to the Court whenever a sitting justice reached the age of 70 with no upper limit specified for the number of justices the Court could have. Roosevelt's plan was vigorously opposed even by many of the President's supporters.

On six occasions prior to the April 1869 act, Congress had enacted legislation to change the number of Supreme Court justices. The April 1869 legislation—passed without the inclusion of the controversial provision in the March House bill that FDR had cited as a precedent—in effect repealed a July 1866 law stipulating that vacancies for associate justices would not be filled until the total number of justices reached seven. Many scholars of the Court have circulated the view that Radical Republicans in Congress passed the 1866 act—which in turn, in effect, had repealed an 1863 act that had increased the number of justices to 10—to take away President Andrew Johnson's power to appoint conservative justices. Once Grant was elected to the presidency, according to this view, Congress increased the number of justices to nine to give their party more sway over the Court's decisions.

Historian Stanley I. Kutler persuasively has challenged part of this interpretation, arguing that evidence is lacking to support the claim that Republicans "primarily sought to avoid a Johnson appointment." Among other arguments, Kutler points out that Johnson himself approved the 1866 bill and that the 1869 bill was passed by Congress before Johnson left office. Kutler contends that both Congress and Johnson believed that the Court had become unwieldy with too many justices. Still, the main intent of the legislation, which included a reorganization of the judicial circuit system, was to reduce Southern influence on the judiciary, Kutler concludes.

Less than one year after Grant's nominees to the Court assumed office, the Court, by a vote of five to four, overturned the four to three opinion in Hepburn v. Griswold that had ruled three legal tender acts of 1862 and 1863 to be invalid, one of the first times that the Court had judged Congressional legislation to be unconstitutional. The acts, instituted to help pay for the war, had authorized the federal government to issue paper money, colloquially known as "greenbacks" as legal tender that would be irredeemable in specie, i.e. gold or silver coins. Political controversy had arisen after rampant inflation had driven down the value of greenbacks drastically and the question arose as to whether creditors could demand payback for debts in coins or would have to accept paper currency. Those who supported the legal tender acts believed that the Hepburn ruling would result in a contraction of the money supply that would hurt many ordinary Americans in debt. Those in support of Hepburn worried that public debt had risen greatly because in borrowing money, the federal government had been at the mercy of foreign governments that had remained on the gold standard. Defenders of Hepburn also charged that its reversal had been instigated at the behest of big business, as the New York Sun wrote, "so that the great corporations might pay their debts in depreciated paper, instead of coin."

The decision, therefore, injures the poor many, and puts immense sums in the pockets of the rich and flourishing few corporations.

On the day that the Hepburn ruling was announced, February 7, 1870, Grant, who favored upholding the legal tender acts, sent two nominations for new Supreme Court justices to the Senate for confirmation. Previously, one nominee, William Strong, as a judge on the Pennsylvania Supreme Court, had ruled to uphold the legal tender acts, and many suspected that the other nominee, Joseph P. Bradley, had vowed he would vote to validate the acts. The ruling to overturn Hepburn and the suspicion that Grant had packed the court caused much adverse comment in the press. The New York Tribune charged, "Powerful corporations, wielding large political and moneyed influence, are deeply involved in the question. . . . The decision, therefore, injures the poor many, and puts immense sums in the pockets of the rich and flourishing few corporations."

Many critics noted Strong's and Bradley's previously ties to railroads. The New York Bulletin bemoaned, "We have now learnt, for the first time, that a President can pack the supreme tribunal of the land, and its Judges can recognize other considerations than those of law and justice. . . . Of all calamities since the foundation of the republic, this is the saddest and the most bitterly wounding to high-minded citizens." The Chicago Tribune similarly lamented, "Nothing has occurred in the history of the country, except, possibly, the Dred Scott decision, so calculated to impair confidence in the stability of the court and the permanency of the republic as this action. . . . The country could survive rebellion, but it cannot outlive the destruction of credit, and the abolishment of the judicial branch of the government."

During the 1872 presidential campaign, Grant's opponents repeated the accusation that he had packed the court with justices who had promised to overturn Hepburn. The controversy was revived periodically until 1935, when Sidney Ratner, later to become a renowned economic historian, presented evidence from the unpublished diary of Grant's Secretary of State, Hamilton Fish, that Grant "required no declaration from Judges Strong and Bradley on the constitutionality of the Legal Tender Act." Fish revealed, however, that Grant did know of Strong's previous ruling and "had reason to believe Judge Bradley's opinion tended in the same direction." While Grant had assured Fish that "he would do nothing to exact anything like a pledge or expression of opinion from the parties he might appoint to the Bench," the president "had desired that the Constitutionality [of the Legal Tender Act] should be sustained by the Supreme Court." Ratner argued that because Grant had not explicitly requested his nominees to decide in favor of Hepburn, "it is not just to say that he 'packed the Court', or that the new judges were 'creatures of the President placed upon the Bench to carry out his instructions.'" A New York Times obituary of Ratner indicated that he had been "influential in President Franklin D. Roosevelt's attempt to expand the size of the Supreme Court by discovering a precedent in President Ulysses S. Grant's appointments to the Court."

Edward S. Corwin, "Curbing the Court," Annals of the American Academy of Political and Social Sciences 185 (May 1936).

The Gaming Evolution
Lionel Hampton: His Life and Legacy
The African-American Mosaic
Charters for Colonies
Peace Corps
Causes of the American Revolution