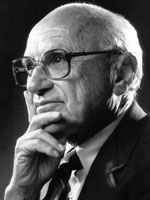 I'm writing a government test on economics. I need a quote from a famous American basically stating that command economies are flawed. I have a quote from Maxwell Anderson, "When a government takes over a people's economic life it becomes absolute, and when it has become absolute, it destroys the hearts, the minds, the liberties, and the meaning of the people it governs"; but I have no date. I've tried to find quotes from Truman, Churchill, Kennan, Reagan, but all these speeches are too political and military in nature. Can you help me find a purely economic quote?

Our resident historian suggests the following quotations. Here is a quote from Milton Friedman, from a column he wrote in Newsweek, dated July 14, 1975, on p. 71, entitled National Economic Planning:

The central planners want planning by them for us. They want the government—by which they really mean themselves—to decide "social priorities" (i.e. tell us what is good for us); "rationalize production" (i.e. tell us where and how we should work); assure "equitable distribution" (i.e. take from some of us to give to others of us). Of course, all this can be voluntary—if we are willing to turn our lives over to them. Otherwise, "antisocial behavior" must be restrained—who can gainsay that? The iron fist must be there—just in case.

Such planning, from the top down, is inefficient because it makes it impossible to use the detailed knowledge shared among millions of individuals. It undermines freedom because it requires people to obey orders rather than pursue their own interests.

Moreover there is a limit to human capacity in administration. Particularly is there a limit to the capacity of legislative bodies to supervise governmental activities. Every time the Federal Government goes into business 530 Senators and Congressmen become the Board of Directors of that business. Every time a state government goes into business 100 or 200 state senators and assemblymen become directors of that business. Even if they were supermen, no bodies of such numbers can competently direct that type of human activities which requires instant decision and action. No such body can deal adequately with all sections of the country. And yet if we would preserve government by the people we must preserve the authority of our legislators over the activities of our Government. We have trouble enough with log rolling in legislative bodies today. It originates naturally from desires of citizens to advance their particular section or to secure some necessary service. It would be multiplied a thousand-fold were the Federal and state governments in these businesses.

The effect upon our economic progress would be even worse. Business progressiveness is dependent on competition. New methods and new ideas are the outgrowth of the spirit of adventure of individual initiative and of individual enterprise. Without adventure there is no progress. No government administration can rightly speculate and take risks with taxpayers' money. But even more important than this—leadership in business must be through the sheer rise of ability and character. That rise can take place only in the free atmosphere of competition. Competition is closed by bureaucracy. Certainly political choice is a feeble basis for choice of leaders to conduct a business.