Why Was the Boston Tea Party Not Stopped by British Troops? 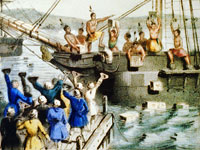 Why were the Sons of Liberty not stopped by British troops as they boarded three ships in Boston Harbor on Dec. 16, 1773 (Boston Tea Party)? Were there no Redcoats patrolling the area? How long did the Boston Tea Party last? An hour, two hours? Why weren't they apprehended?

The tea was on three privately owned merchant ships. One hundred and fourteen chests were on board the Dartmouth, the first ship to arrive in port. The other two ships, the Eleanor and the brig Beaver carried 228 chests between them, along with other cargo. As the ships sailed into Boston Harbor, they each passed by Castle William to the south, which was under the command of a British officer and had upwards of a hundred cannon. When the ships came into the harbor, but before they docked, port officials boarded them. That meant that they had officially reached port and that their movements were now under the command of port officials instead of their captains.

Behind the tea-laden ships, British Admiral John Montagu brought a squadron of warships to prevent the colonists from forcing the ships back out to sea before they were unloaded. This put the captains (and the ships' owners) in a bind. If the tea wasn't unloaded, customs weren't paid. And if the ships tried to sail back out of port, Montagu would stop them and charge them with failing to pay customs on their cargo that was due, according to him, because they had already entered port.

After a few days, the colonists had the ships come in close to Griffin's Wharf. The Sons of Liberty organized a continuous watch of the vessels. Twenty-five men on each shift ensured that the ships were not unloaded under the cover of darkness, or at least to sound an alarm if there was an attempt. The ships' captains came ashore and left the mates on board. The situation remained the same for more than two weeks.

Thomas Hutchinson, the royal governor of colonial Massachusetts, clearly understood that the colonists were angry, but he did not anticipate that they would damage the cargo. He was counting on the fact that after 20 days without having paid customs, the customs authorities—with the assistance of British sailors and soldiers—could legally impound the tea from the ships, and then, from Castle William, disburse it in small amounts to a few merchants who could resell it. This would circumvent the colonists' effort to make sure that the tea did not enter Massachusetts. Hutchinson and the apprehensive merchants who were willing to receive the tea had holed up with the troops in Castle William.

Boston was not under martial law, so soldiers were not policing the city, although Hutchinson could have brought a detachment of soldiers in, had he known beforehand the particulars of a threat. He did not post a military guard at the wharf, however, perhaps to avoid provoking a confrontation with the crowds keeping watch there.

On December 14th, when the 20 days of waiting were almost up, Hutchinson wrote his brother Elisha about the excited Bostonians, "I hardly think they will attempt sending the tea back, but am more sure it will not go many leagues: it seems probable they will wait to hear from the southward, and much may depend on what is done there." (Hutchinson, 96) Yet Hutchinson also believed the colonists might take some form of direct action if an attempt was made to land the tea onto the wharf.

Down at the Wharf

Just after six o'clock on the night of December 16, 1773, a group of about 60 men daubed their faces with burnt cork, coal dust, or donned other makeshift disguises, armed themselves with hatchets, and formed a raiding party. Some of them styled themselves "Indians."

They made their way to the wharf. The Sons of Liberty's watch was already there, and still others joined them, either to assist or simply to see what was happening. The raiding party formed three groups of 50 each, and boarded all of the nearly deserted ships at about the same time. They met no resistance.

Lendall Pitts, the commander of the group that boarded the brig Beaver, "sent a man to the mate, who was on board, in his cabin, with a message, politely requesting the use of a few lights, and the brig's keys—so that as little damage as possible might be done to the vessel;—and such was the case. The mate acted the part of a gentleman altogether. He handed over the keys without hesitation, and without saying a single word, and sent his cabin-boy for a bunch of candles, to be immediately put in use." (Thatcher, 1812).

The moon shone brightly too, so their work was well lit. The night was very quiet and neither the crowd on the wharf nor the raiding party spoke much. Onlookers at the wharf, as well as the men on some of the closer British ships, however, quite distinctly heard the sounds of the chests being staved in.

The party quickly brought the 342 chests of tea (a total of 90,000 lbs.) onto the deck. They split them open and threw the tea and the chests overboard into the harbor. The party took care that no other property on board the ships was harmed, and that none of the raiders took away any of the tea. They even swept the decks clean of loose tea when they were done. They worked quickly, apprehensive of a possible attack from Admiral Montagu's squadron, part of which was only a quarter of a mile away.

Montagu watched the affair from the fleet, but he took no action because of the cargo ships' position next to the wharf. "I could easily have prevented the Execution of this Plan," he wrote the following day in a report, "but must have endangered the Lives of many innocent People by firing upon the Town." (Labardee, 145) Instead, he rowed ashore and watched from a building nearby, even briefly exchanging taunts with the Indians.

The tea party lasted three hours, finishing around nine o'clock. The raiding party then formed in rank and file by the wharf, and, shouldering their hatchets, marched, accompanied by a fifer, back into town, dispersed, and went home.

The next morning a large, winding mound of loose tea still floated in the harbor, and a party of colonists rowed out in boats and sank it down into the waters with their oars. The British fleet witnessed this, too, but did not interfere.

The disguised men's identities were kept secret by their fellow Bostonians, and Governor Hutchinson was unable to charge the members of the raiding party, but Parliament responded five months later (news traveled back and forth across the ocean very slowly then) with a series of measures meant to force Boston to heel.

Benjamin Bussey Thatcher ("A Bostonian") et al, Traits of the Tea Party; being a memoir of George R. T. Hewes, one of the last of its survivors; with a history of that transaction; reminiscences of the massacre, and the siege, and other stories of old times (New York: Harper & Brothers, 1835).