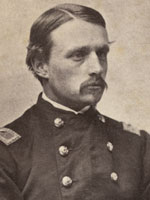 As I understand it, Robert Gould Shaw's parents decided to leave him buried in the mass grave near where he was mortally wounded at Fort Wagner. Is he still buried in that location beneath the sand? Is it now under water? Is there some sort of marker designating the burial spot?

Colonel Robert Gould Shaw (1837-1863) was the young white Civil War Union army officer who commanded the otherwise all-black 54th Massachusetts Volunteer Infantry. He was killed while leading a fierce but unsuccessful charge by his troops on the sand and earth parapets of Fort Wagner on Morris Island near Charleston, South Carolina, on July 18, 1863. The 54th Massachusetts lost many men that day, with a casualty rate of over 50%. The other Federal units in the attack suffered heavy losses as well. Union casualties for the day numbered more than 1,500. Union Brigadier General Quincy Granville sent an inquiry to the Confederate commander of Fort Wagner, asking about the disposition of Shaw’s body. The reply was that Col. Shaw had been “buried with his niggers,” in a common grave, a trench along the island’s shore, close to the fort. Indeed, this was where all the Union dead were buried on the tiny island. Whether or not the Confederate commander thought of this as inflicting a particular insult on Shaw, this is how it was taken in the North, especially because Shaw’s fellow officer, Col. Haldimand Putnam, commanding the 7th New Hampshire Infantry, who also died in the attack, “received all the honors of sepulture which the circumstances of his death permitted, from the fraternal hands of his West Point classmate, General Robert H. Anderson, of the Confederate Army,” although his body was not recovered. Nevertheless, even in the few days immediately after the bloodbath, Shaw had become, in the North, an uncommon martyr for the principle of black emancipation, and sentiment sprang forth to exert every effort to exhume his body and rebury him back in his hometown of Boston as a hero. Shaw’s parents, however, prominent in Boston as strong abolitionists, resisted this sentiment. His father sent instructions to the officers of his son’s regiment, writing, “We would not have his body removed from where it lies surrounded by his brave & devoted soldiers, if we could accomplish it by a word. Please to bear this in mind & also, let it be known, so that, even in case there should be an opportunity, his remains may not be disturbed.” By September, the decomposition of the bodies in the trench had begun to contaminate Fort Wagner’s Confederate defenders’ fresh water supply, and they abandoned the fort as a consequence. Union soldiers immediately moved in, but, guided by Shaw’s parents’ wishes, did not exhume Col. Shaw’s body. Morris Island is smaller than 1,000 acres and is subject to extensive erosion by storm and sea. Much of the previous site of Fort Wagner has been eroded away, including the place where the Union soldiers had been buried. However, by the time this had happened, the soldiers’ remains were no longer there because soon after the end of the Civil War, the Army disinterred and reburied all the remains—including, presumably, those of Col. Shaw—at the Beaufort National Cemetery in Beaufort, South Carolina, where their gravestones were marked as “unknown.” The Boston area has at least three memorials to Robert G. Shaw. In 1897, the Harvard Memorial Society erected a tablet on Massachusetts Hall, which had long served as a dormitory, that listed some of its past student residents who had gone on to fame. This tablet included Shaw’s name (he had been a Harvard student, but had withdrawn before graduating), along with such other notables as Artemas Ward, Elbridge Gerry, Francis Dana, Joseph Story, Jared Sparks, and Francis Parkman. The Shaw family also placed a bronze tablet in memory of Robert Gould Shaw on an earlier-installed cenotaph in its family plot at Mount Auburn Cemetery in Boston. The most well known memorial, however, is the Robert Gould Shaw and Massachusetts 54th Regiment Memorial. It is a bas-relief of Shaw and his men, designed by Augustus Saint-Gaudens, and placed on Boston Common, across Beacon Street from the Massachusetts State House, in 1897. The memorial was the focus of attention during the late 1980s and early 1990s, concurrent with the making of the film Glory, that depicted the actions of the 54th Massachusetts at Fort Wagner. It occasioned a public reassessment of the fact that, beginning from the immediate aftermath of the attack, a significant portion of the sentiment of white Northern abolitionists had elevated Shaw’s place as a determined sacrificial martyr to the cause of black emancipation far above the level of the other men of the 54th Massachusetts, almost as if the black men of the 54th could do nothing by themselves without a white savior in the person of Shaw. Abolitionist Eliza Sedgwick’s 1865 poem about Shaw contained the lines: “Buried with the men God gave him—Those who he was sent to save; Buried with the martyred heroes, He has found an honored grave.” Shaw’s mother and father did not have a patronizing view of the relationship between their son and his men and indeed shared a sentiment of African American empowerment that was embodied in a line from Lord Byron that abolitionists often quoted—“Who would be free themselves must strike the blow.” They objected to the original design for the memorial because it showed their son on horseback, elevated above the figures of the enlisted men around him on foot. Nevertheless, a public commission funded Saint-Gauden’s bas-relief, which portrayed this design, and it was dedicated as a memorial to Shaw. The public reassessment of the 1990s eventually refocused the memorial on the 54th Massachusetts as a whole, rather than on Shaw in particular.