Texts throughout U.S. history have featured imagery from the Book of Revelations, including the the documents on this site. 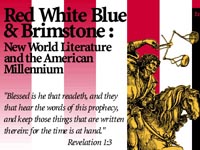 An exhibit of 101 images with a 10,000-word essay that tracks the influence of the Book of Revelations' apocalyptic vision of history in shaping conceptions of America and its destiny for religious zealots and others from the colonial era to the present. With images primarily from published texts—covers, title pages, illustrations, and relevant pages of writing—the exhibit is divided into 14 chronological sections, each opening with a quote from Revelations and detailing its relevance in successive historical periods. The exhibit begins with the period of the English Reformation, when John Foxe's Book of Martyrs, exported to America, related contemporary political events to scripture and established a timeline that proved influential over the next 250 years. The site covers beliefs that American Indians were descendants of the lost tribes of Israel; Cotton Mather's sermons as the culmination of a century of speculation about America's place in the apocalyptic scheme; early nationalist ambitions as fulfilling prophecy; and the influence of Revelations on Thomas Jefferson. The site also looks at William Miller's numerologically-based predictions of the end of the world in 1843; millennial movements in the antebellum era; urban exposÎs that conceived of American cities as present-day incarnations of Babylon; and 20th-century anti-Semitic thought. Well organized, the exhibit provides a useful introduction to students of American religion and culture of the persistence of the power of the Book of Revelations, but exaggerates its importance with the odd claim that no other book has "produced a more profound vision of America's hopes, duties, dreams, and destiny."

Tips to Trappers
Harrisburg's Old 8th Ward
Celebrate More Than St. Patrick
With an Even Hand: Brown v. Board at Fifty
Reading Photographs: Snow Day
The History of Vaccines