Who Earned a Medal for Cutting Costs by Starving Confederate Prisoners? 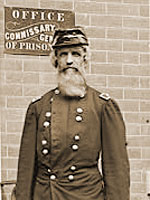 A well-read friend recently told me about a prison camp in Southern Maryland during the Revolutionary or Civil War. If it was the Civil War, it must be Point Lookout. My question is this: Who was the military leader (officer) who was supposedly awarded a medal or award for the amount of money he saved by keeping the prison in its deplorable condition (i.e. starving the prisoners)?

Your friend may have been thinking of William Hoffman (18071884), who was Colonel of the 3rd U.S. Regular Infantry, and, as Commissary General of Prisoners, reported directly to Secretary of War Edwin Stanton during the Civil War.

On October 13, 1863, Brigadier General Gilman Marston (18111890), the Commander of the military district where the war prison at Point Lookout, Maryland, was located, wrote to Hoffman, asking for money to build barracks for the thousands of Confederate prisoners there, who had to sleep in a large stockade compound crowded into flimsy tents, summer and winter. Hoffman denied General Marston's request. Marston also asked to be supplied with better rations for the prisoners, but Hoffman also refused that request, saying that the prisoners were already "bountifully supplied with provisions" sent to them from their families and friends, which was clearly not true.

The Union officer then acting as the Provost-Marshall in charge of the camp, Captain Joab Nelson Patterson (18351923), was relatively well-regarded by the prisoners, despite the terrible conditions there. One of the prisoners wrote of Patterson that he was "as kind as he was allowed to be."

Brady proceeded to increase prisoner suffering and to appropriate for himself vast amounts of provisions meant for them.

General Marston was reassigned, as was Captain Patterson. Replacing Marston was Brigadier General James Barnes (18011869), who had performed extremely poorly at the Battle of Gettysburg. He was a kindly man, thought the prisoners, but he had almost no contact at all with them. His Provost-General at Point Lookout became Major Allen G. Brady, 20th Regiment, Veteran Reserve Corps (18221905), a cruel, brutal, and arrogant man who assumed his post at the prison in June 1864 and proceeded immediately to increase enormously the sufferings of the prisoners and to appropriate for himself vast amounts of provisions meant for them. He remained in command of Point Lookout until the end of the war. His tenure there was the worst time for the prisoners.

Brigadier General Barnes received a brevet promotion to Major General just before the end of the war. Major Brady was never promoted anywhere near as rapidly as he believed he merited, but months after the war ended, he was promoted to Brevet Colonel before he was discharged.

Colonel Hoffman appears to have handled the management of Point Lookout no differently than he did the other Union prisons, which is to say badly, allowing terrible conditions of privation and abuse to grow unchecked. Secretary Stanton certainly did nothing to intervene and may even have encouraged this as one way to punish the South for its rebellion. Stanton did not wish to exchange prisoners with the South because he believed the North could better afford to prosecute the war without the return of its men than the South could, and because he believed that negotiating with the South on this issue might provide some precedent that could be construed as a Union recognition of the Confederacy as a sovereign power.

Many prison camps on both sides during the war were miserable places where many tens of thousands of prisoners from either side died. Prisoners returning from Point Lookout, however, pointed out that whereas some of the privations of Union prisoners in Confederate camps might be attributed to the general deterioration of conditions in the South as the war progressed, the privations of Southern prisoners in Union camps had no such contributing cause, and, in fact, were fostered by a commonly-practiced policy of retribution.

At the end of the war, Colonel Hoffman, having stifled some camp commanders and aid groups who had wished to help Confederate prisoners during the war, was actually able to return to the U.S. Treasury almost $2 million that had been originally allocated to feed Confederate prisoners. He was brevetted Brigadier General on October 7, 1864, for "faithful services," and then brevetted Major General on March 13, 1865, for "faithful, meritorious and distinguished services as Commissary General of Prisoners during war."