How Much Have Federal Census Takers Made Through the Years? 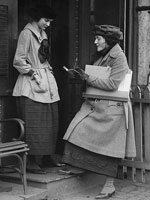 I am researching the history of the Census Bureau and am interested in the wages of census field enumerators through the years. Where is this information?

The National Archives and Records Administration (NARA) makes available the census records from the decennial censuses (the latest to be opened for public inspection is the 1930 census). But administrative records of the Census Bureau are also kept at NARA. Generally, these are in Record Group 29. NARA's website contains a description of the items, including, for example, item 134, "Record of Enumerators, 1900," which is in 37 volumes. These volumes give the name and address of each enumerator (commonly called a "census taker") and agent, his or her daily rate of pay, and the number of his or her enumeration district and his or her supervisor's district.

In the 19th century, compensation rates for enumerators generally were set by the laws that authorized each specific census. Carroll D. Wright and William C. Hunt reprinted these laws in The History and Growth of the United States Census, published in 1900. This volume includes the pay rates for enumerators--and other staff--for each census from 1790 through 1890.

In it, we learn, for example, that the authorization law for the 1790 census specifies that the "marshals' assistants" (the enumerators) were to receive $1 for every 150 persons enumerated in rural areas and $1 for every 300 persons in cities, with some discretion allowed for marshals to supplement the pay of the enumerators working in rural areas, depending on the difficulties they encountered in locating people.

Pay Increased with the Complexity of Information Gathered

The amount and kind of information collected grew with each census. As a result, the basis on which enumerators were compensated reflected their increased labor. For the 1850 census, for example, enumerators were paid 2 cents per person enumerated (living or deceased), with a 2% supplement for collecting "social statistics," 10 cents per mile traveled, 10 cents per farm enumerated (where crop and livestock production figures had to be collected), and 15 cents per "establishment of productive industry."

The pay schedule for the 1880 census (the first in which women could serve as enumerators) was similar, except for replacing the provision for travel compensation with a provision enabling the Superintendent of the Census to adapt the rate of compensation to various regions, depending on the difficulties (mostly geographical) in collecting information there. A ceiling of $4 per day was set for enumerators in districts east of the 100th meridian and $6 per day west of that (enumerators were expected to work a 10-hour day).

Also included in Carroll's book are detailed listings of all the information that enumerators were expected to collect, as well as the printed instructions given to the marshals and their assistants, some of which are concerned with making exceptions to the standard pay rate for enumerators.

Enumerators have sometimes had to press claims for payment for "extra schedule work," such as, in 1880, arranging and copying long lists of occupants in alphabetical order or for required attendance at the local courthouse where they filed their forms.

For the last (2000) census, the Federal Register listed enumerators' wages as ranging from $8.25 to $18.50 per hour, depending on the locality. Typically, in recent censuses, regional supervisors have been given budgets and then decided how to recruit and pay the enumerators they have needed. Pay for mileage or travel has been more realistically set on a local basis, rather than a national one.

Pay Has Not Been the Only Motivation

Census enumerators have often been motivated by other considerations than the mere pay--the feeling of patriotism, for example, or civic duty, or a taste for adventure, or even sheer curiosity. The people being enumerated have not always welcomed the questions of their government enumerators. In addition, the enumerator's job can be physically and emotionally demanding. For the 1890 census, for example, the regional agent in North Alaska tried to recruit men as enumerators and found that the wages he could offer them ($16 a day) were "absurdly low in the gold region." Most people he asked "simply laughed at him."


the enumerator's job can be physically and emotionally demanding.

He then "appealed to the men's friendship, to their love of adventure, and to their love of country," and finally convinced 14 men to undertake the arduous task, which required traveling long stretches by dogsled and canoe and some wild encounters with some very wild men. The government paid them--in addition to their wages--50 cents a day per dog in their teams in order to feed them, and each enumerator also took along an Indian interpreter, who was paid $5 a day by the government.

The historian must also note that census-takers have sometimes been accused of being caught up in the "enthusiasm" of politics and the desire to maximize the local count, resulting in rumors of under-the-table remuneration. As an example, the U.S. marshal overseeing the 1870 census in the upper midwest lived in St. Louis, whose citizens, apparently, thought of the census as an opportunity for St. Louis to compete with Chicago. The census results showed a larger population in St. Louis than in Chicago, by a small amount, and the "citizens of St. Louis in grateful appreciation of the figures gave the marshal a banquet and presented him with a service of silver, as a reward for his victory over Chicago." The citizens of Chicago, however, were not at all amused.

The website of the U.S. Census Bureau provides, among other things, the questionnaires and instructions for the censuses from 1790 through 2000.

The Census Bureau has also devoted part of its website to the history of the census.

The enumerator instructions from the Government Printing Office for each census from 1850 through 1950 are also available online from the Minnesota Population Center's IPUMS-USA website (Integrated Public Use Microdata Series).

Census questions and enumeration forms from 1850 through 2000 are also available from IPUMS-USA.

Carroll D. Wright and William C. Hunt, The History and Growth of the United States Census, prepared for the Senate Committee on the Census. Washington, D.C.: Government Printing Office, 1900. Reprinted in 1966. The original 1900 issue is available on Google Books.

Guide to the Records of the Bureau of the Census (Record Group 29) at the National Archives and Records Administration.

George Jean Nathan, "Humors of the Census: Some of the Difficulties Encountered by the Enumerators of Uncle Sam's Increasing Family," Harper's Weekly, October 1, 1910, pages 14-15.