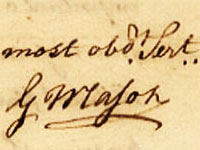 In trying to set up a lesson describing the Four Major Founding Documents of the United States of America, there was debate as to the fourth. The U.S. Constitution, the Declaration of Independence, and the Articles of Confederation are typically considered the founding documents, but what is widely believed to be the fourth document?

The Meanings of "Founding"

From there, filling out a short list of four—or a few more—documents largely depends on how we construe the meaning of the word "founding."

Filling out a list depends on how we construe the meaning of the word "founding."

If it means foundational for the initial establishment of the U.S., that is, what got the country up and running, we could consider adding the Federalist (and perhaps the Anti-Federalist) Papers or the Articles of Confederation. Other documents strongly affecting the founding itself included John Locke's Two Treatises of Government, and even, at long range, the Magna Carta. Also, as precedent to the Bill of Rights, we might include George Mason's Virginia Declaration of Rights. Along these lines, therefore, a list of "the Four Major Founding Documents" that could be studied in class might be: 1) the Declaration of Independence, 2) the Constitution, 3) the Bill of Rights, and 4) the Federalist/Anti-Federalist Papers.

If "founding," however, means foundational for clarifying how we have come to understand our country today, the list of documents grows in a different direction and becomes difficult to limit.

If "founding," however, means foundational for clarifying how we have come to understand our country today, the list of documents grows in a different direction and becomes difficult to limit. Some candidates for inclusion might be the Mayflower Compact, the Northwest Ordinances, the Emancipation Proclamation, the Gettysburg Address, the Seneca Falls Declaration of Sentiments, and the "I Have a Dream" speech by Martin Luther King, Jr.

Several years ago, the National Archives and Records Administration collected a list of 100 milestone documents in American history called Our Documents. The list begins, chronologically, with the Richard Henry Lee Resolution of June 7, 1776, proposing independence for the American colonies, and runs through the Voting Rights Act of 1965.

Images:
1876 facsimile of the text of the Declaration of Independence as it appeared in the Pennsylvania Packet, July 8, 1776.

Detail of copy of the Constitution of the United States, National Archives and Records Administration, Washington, DC.