Spy in a Petticoat 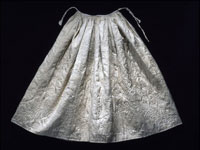 The person I am researching is my great X 7 Grandmother: Harriet Prudence Patterson Hall. According to various unidentified websites she was a spy for the Americans in or near Charleston, South Carolina, during the Revolutionary War. I have trouble finding any reliable and therefore quotable sources for this information. Would you please help identify anything of value in this area?

Prudence Patterson was born in 1743 (either in Wales or in County Antrim, Ireland) and emigrated to America with her parents. In 1763, she married another immigrant, John Hall, in York, South Carolina. They had eight or nine children. Their children's names were James, John, Prudence, Jennet, Margaret, William Henry, Alexander Brown, Josiah, and Major Temple.

John Hall appears on the U.S. Revolutionary War Rolls as a private in the 2nd South Carolina Regiment. He died in 1784. Prudence appears as the head of family in York in the 1790 Federal Census, residing there with her children and a slave.

Carol Berkin, a historian at Baruch College, mentions Prudence Patterson in her 2005 book, Revolutionary Mothers: Women in the Struggle for America's Independence:

"Far to the south, as the British besieged the South Carolina capital of Charleston in early 1776, Harriet Prudence Patterson Hall and three of her friends made their way past enemy soldiers surrounding the city. When the sentries topped them, Hall explained that they were on their way to purchase medicine from a Charleston apothecary. What the redcoats saw gave them little reason to be suspicious: standing before them were four well-dressed matrons, on an errand that took them into the city. The British soldiers stepped aside, giving the women permission to pass. With that, Harriet Hall walked into Charleston, an important message for the American commander safely hidden inside her petticoat."

For this information, Berkin' cites the Year Book, 2003-2004, of the Harriet Prudence Patterson Hall Chapter of the National Society of the Daughters of the American Revolution of North Little Rock, Arkansas. You might contact the Prudence Hall Chapter through their website and ask them about the source of their information. According to their website, Harriet Hetley West, a descendant of Prudence and John Hall, emigrated to Arkansas in the 1850s, and it was through her and her descendants that the North Little Rock Chapter of the DAR was formed in 1963.

Another source for more information would be the Southern Revolutionary War Institute, at the McCelvey Center in York, South Carolina, at the Museum of York County. A description on their website of their holdings of family histories related to York County, says they have a copy of The Hall Family, by Claudia Hall O'Driscoll, which may never have been published, since it doesn't show up in online library catalogs. I would guess that your ancestor appears in it, perhaps with some documentation.

It is from this book, presumably, that O'Driscoll family researchers have copied a letter from Prudence Hall's descendant Annie Farris Lumpkin to Daisy West Watkins, dated April 23, 1933, Rock Hill, South Carolina, and posted it on the Ancestry.com website:

Our notable ancestress, Harried [sic] Prudence Patterson, born in the year 1743, was of Welsh and English descent. On the maternal side she was Welsh, on the paternal, English. The Patterson family emigrated to America when Prudence was a child. The family first settled in Maryland, and later moved to Pennsylvania. She was 15 years of age when the family moved from Maryland to Pennsylvania. She rode horseback all the way and drove the cows behind the covered wagons. Later they moved to South Carolina and settled near Charles Town where she grew to young womanhood and met and married John Hall, also of an English family. John Hall was six years his wife's senior, having been born in 1737. Patterson was 20 years of age and John Hall 26 when their marriage took place in 1763.

Sometime prior to the American Revolution they left Charles Town and moved to upper South Carolina and settled in York District. Here they bought land on Little Allison Creek and built their home among a large grove of fine old trees, near a big spring of cool sparkling water, an ideal place for a residence and, strange as it may seem, this very place was destined to play an important part in the history of the American Revolution. Here a big brick store was erected, which not only served the people for miles around as a trading point, but also became the distribution point for salt. Salt was a scarce article in those days. During the Revolution, women rode horseback from as far as Camden to this place to purchase a supply of salt, which was limited to a certain amount for each family. The salt was hauled in wagons from Virginia by slaves. Here Prudence became a heroine of her day. She saved the life of a man whom the Indians had scalped and left to die. She had a number of milk cows ranging at large. One of the cows failed to come home at milking time. She mounted her horse and rode out through the dense woods to find her. She heard a moaning and groaning of someone in great distress. Being a pioneer woman of a fearless and intrepid character, she rode on till she found the man laying in water. She rode quickly back and spread the news. The man was rescued and nursed back to life. His name was John Forbess. He lived to a ripe old age and is buried in Ebenezer Cemetery.

Prudence would often walk the ten miles to attend services at Bethel Presbyterian Church, where she is now buried in Clover, South Carolina.

Prudence and two other women rode horseback to Charlestown [that is, Charleston] during the war under the guise of purchasing medicine. They were held up by the British as spies, but their story of being out to purchase medicine they were allowed to pass the British ranks. They got their medicine and returned, but not until Prudence had delivered an important message to the American Army, which she had carried sewn up in her petticoat. She had outwitted the British, and oh how they hated her. I wish I could remember the little doggerel rhyme the British made about these three woman, but I can only remember the line "Prudence Hall, Peggy Strain and Beckie McCall."

After John Hall died, Prudence moved to Union County to a place called "Sylvan Springs," a sort of summer resort. There she married a man by the name of [Robert] Harris, but soon separated from him. She ran a boarding house.

The unsourced material about Prudence Hall you see on the web is almost certainly derived from this letter.

Possibility of More Evidence from Other Sources?

Corroborating Prudence's wartime adventures may be difficult. A researcher from the Patterson family, however, in a comment on the Genealogy Forum website, raises two issues:

There is no record showing Prudence Hall with a first name Harriet. That appears to come from researchers of the [Hall] family, but no records (John Hall's will & estate papers nor Prudence Hall Harris' own will & estate records) indicate such a first name. … One of my Farris cousins (Annie Farris Lumpkin) was interested in family history and was a Hall descendant through Harriet Hetley West. She told a story about a Prudence Hall saving a wounded militiaman named John Forbes (my ancestor) during the Revolutionary War. But from the description of "Prudie Hall" it was a young woman (John & Prudence's daughter Prudence?), not Prudence Patterson Hall herself.

Annie Lumpkins' letter, however, does not say when the letter-in-the-petticoat incident occurred. Nor does the letter say that the message that Prudence delivered found its way to an American "General," as do some of the unsourced sites on the web. Perhaps the Hall family history at the Southern Revolutionary War Institute or information held by the Prudence Hall Chapter of the DAR gives more detail.

At any rate, the British conducted another siege of Charleston, from April through May of 1780, which was successful. Among the more than 5,000 colonial soldiers under Major General Benjamin Lincoln who surrendered to the British on May 12th was the 2nd South Carolina Regiment, which was John Hall's unit. For more on this siege (although there is no mention of John and Prudence Hall), see Carl P. Borick's A Gallant Defense: The Siege of Charleston, 1780 (Columbia, SC: University of South Carolina Press, 2003) and Walter J. Fraser's Patriots, Pistols, and Petticoats: "Poor Sinful Charles Town" During the Revolutionary War Era (Columbia, SD: University of South Carolina Press, 2003).

The British commander of both sieges of Charleston was Sir Henry Clinton. His collected papers eventually found their way to the Clements Library at the University of Michigan. From Clinton's papers, the library has created a fascinating web exhibit, Spy Letters of the American Revolution. The exhibit has no documentation on Prudence Hall, but it draws on only a very small number of items in the collection.

Bethel Presbyterian's webpage about its cemetery, including notes on the Revolutionary War soldiers buried there.

General Charles Lee's letters and dispatches during the 1776 siege of Charleston are collected in The Lee Papers, Vol. II, 1776-1778. Collections of the New York Historical Society, 1872.

Map of the disposition of British forces around Charleston during the 1780 siege.

Various other maps of the Charleston area during the Revolutionary War.

Images:
Detail from a map of the June 1776 British siege of Charleston, published by R. Phillips, Bridge Street, Blackfriars, London, 1806.