Hear the recollections of ex-slaves and freedmen in their own voices.

Voices from the Days of Slavery: Former Slaves Tell Their Stories

Voices from the Days of Slavery: Former Slaves Tell Their Stories 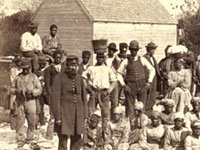 This site captures the recollections of 23 former slaves, born between 1823 and the early 1860s. Several of the people interviewed were more than 100 years old. In the recordings, subjects discuss their entire lives, not just their lives as slaves, but they provide an important glimpse of what life was like for slaves and freedmen. They discuss how they felt about slavery, slaveholders, how slaves were coerced, their families, and, of course, freedom.

Each of the 23 subjects' testimony is presented in four formats: Real Audio sound, MP3, Windows WAV, and transcription. Many of the subjects sang as part of their testimony; those songs are collected here, as well.

Visitors should not miss the Faces and Voices from the Presentation section, where photographs and short biographies are posted for seven of the subjects. The father and grandfather of one of the subjects, George Johnson, were owned by Confederate president Jefferson Davis. Johnson shares his recollections of Davis.

This site contains extraordinary primary sources, and is a tremendous resource for research into slavery and Reconstruction.