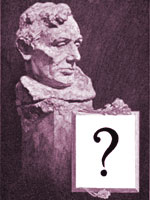 Recent publications and documentaries have suggested that Abraham Lincoln was a homosexual. How do you suggest this topic be discussed in the high school classroom if students bring it up?

The topic of an historical figure’s sexuality can be used by teachers to pique student interest in the ways that historical inquiries attempt to resolve salient questions. If students bring up the subject of Lincoln’s alleged homosexuality, a high school teacher might welcome the opportunity to involve students—who by initiating the discussion have indicated a potential receptivity to a “teachable moment” —in broader questions such as why Lincoln’s personal life might matter to people living in the 21st century; how notions of sexual identity and sexual deviance and normality have changed over time; and how historians might evaluate the limited evidence available in the historical record regarding Lincoln’s sexual life.

To lead a discussion of the first two questions listed above—why a prominent historical figure’s sexuality matters and how sexual identity designations have changed—teachers should familiarize themselves with some of the literature that the field of queer studies has produced in the past 40 years. Sharon Marcus, “Queer Theory for Everyone: A Review Essay,” Signs: Journal of Women in Culture and Society 31, no. 1 (2005): 191-218, offers a concise account of many of the myriad issues and positions taken in the scholarly literature. Larry Gross, “The Past and the Future of Gay, Lesbian, Bisexual, and Transgender Studies," Journal of Communication 55, no. 3 (2005): 508-28, puts queer theory and related studies into historical perspective. Donna Penn, “Queer: Theorizing Politics and History,” Radical History Review 62 (1995): 24-42, specifically addresses concerns relevant for the historical investigation of sexual identity. Henry Abelove, in “The Queering of Lesbian/Gay History," Radical History Review 62 (1995): 45-57, relates his experience teaching gay and lesbian history to undergraduates at Wesleyan University.

With regard to Lincoln, teachers should familiarize themselves both with C. A. Tripp’s The Intimate World of Abraham Lincoln, ed. Lewis Gannett (New York: Free Press, 2005), a comprehensive account arguing that Lincoln led a homosexual life in secret, and with commentary on Tripp’s book by other Lincoln scholars. Tripp, who joined Alfred Kinsey’s team at the Institute for Sex Research in 1949, died in 2003 before he could edit the book or respond to the challenges that others have published since. In an illuminating introduction to Tripp’s book, historian Jean Baker adds historical context to his argument, which analyzes Lincoln’s correspondence along with documentary evidence concerning purported sexual acts between Lincoln and a number of men.

Martin Johnson’s essay, “Did Abraham Lincoln Sleep with His Bodyguard? Another Look at the Evidence,” Journal of the Abraham Lincoln Association 27, no. 2 (2006): 42-55, presents a summary of the direct and circumstantial evidence that Tripp offered in his argument. The evidence concerns claims from two supposedly independent sources that Lincoln, known to have shared a bed with a number of men during his years in Illinois, slept with a bodyguard with whom he had become friendly when his wife and children were away during his tenure as president. Johnson briefly recounts the reaction of Lincoln scholars to Tripp’s assertions and conducts his own examination of the evidence, concluding that the two sources “both rely on a common source” that “must be weighed against an overwhelming mass of contemporary and later eyewitness testimony that breathes not a word of scandal.” In light of the preponderance of material already existing on Lincoln, Johnson cautions against making “into a defining episode” of his life, a claim of his supposed bisexual or gay orientation that relies so strongly on only one source.

California Heritage Collection
Photographs from the Chicago Daily News: 1902-1933
Women in the Lab (and the Field)
Lionel Hampton: His Life and Legacy
The 3Cities Project
The Atomic Bomb: Hiroshima and Nagasaki