True Americans in the Cold War 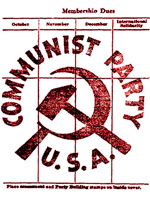 How did Cold War politics and culture create conflicts over what it meant to be a “true American”?

America has not yet emerged from conflicts over what it means to be a "true American." Consequently, historical assessments of the Cold War and its ramifications in American culture vary widely, depending on how they see the fundamental political issues at stake.

During the Cold War, the debate about what it meant to be a true American expressed tensions that had been present in the U.S. since its founding and had inspired reformers ever since. In that sense, Cold War struggles with the question of what it meant to be a true American represented an internal problem, rather than merely something thrust upon the country by an external threat. These struggles, for example, amplified popular ambivalence about the leftward swing of the country during the Depression and the New Deal, and the resulting recalibration of the relationship between the government and the individual.

Nevertheless, they also resulted from an external political and military challenge posed by the Soviet Union that deliberately "heightened the contradictions" within American culture, to use the Marxist term. Soviet policy aimed to advance the U.S.S.R.'s interests and to spread its revolution against capitalism around the world. The Soviets also recognized that this same policy would counter U.S. efforts to encircle or "contain" them in Europe, the Mideast, and Asia. The result was that many Americans at the time regarded the Cold War as a war with two fronts. One was abroad and one was at home.

Toward the end of World War II, Democrats were criticized as being too tepid about the threat that international communism was "coming home" to America. Because of this, in the run-up to the election of 1944, FDR dumped his incumbent vice-president, Henry Wallace, and replaced him on the Democratic ticket with Harry Truman.

Henry Wallace ultimately ran for president on the Progressive Party ticket. In the 1948 election, he charged that the Cold War was America's fault, and was principally the invention of U.S. military and corporate interests for the purpose of consolidating their power by exploiting a baseless fear of the Soviet Union and communism. This line in fact mirrored what the Soviet Union was saying.

When Truman became president after FDR's death, he formulated his own foreign policy, trying to solidify a tough anti-communist effort in the face of his party's recent widely perceived softness. The strategy he adopted was that of "containment" and "deterrence" of the Soviet Union and communism abroad, combined with funding and promoting economic development in democratic and potentially democratic countries. This strategy was continued in one form or another by both Democratic and Republic presidents throughout the Cold War.

Nevertheless, beginning under the Truman administration and coming to a crescendo under Eisenhower's, a series of Congressional committees began to investigate whether the Executive Branch, during the New Deal under FDR and Truman, had been "infiltrated" by Soviet sympathizers and even active enemy agents. No matter what they uncovered, these investigations were bound to be clothed in divisive partisan politics.

In one sense, the contest over what constituted a "true American" reflected a competition between two great powers, each aiming to advance two variants of revolutionary ideologies, democracy and communism.

Was a "true American," then, a collectivist or an individualist? Liberal or conservative? Urban or rural? Part of an intact and content nuclear family or not? Was it more "American" for women to be stay-at-home mothers or to stay single and pursue their careers in the workplace?

Was it more "American" to rebel or to salute a flag? To submit to authority or to dissent from the status quo? To urge social reform or to honor traditional social mores? To sing "God Bless America" or "This Land is Your Land"? To work for a union or in an open shop? Was America a place that welcomed foreigners or not?

Such questions had not been settled before the Cold War; nor are they settled today. In addition, there were forces at work at every point along the political spectrum that both unified and fragmented the American identity. Necessarily, the question of what and who was a "true American" had ramifications in political debate about foreign and domestic policy, but it also appeared with many inflections in art, music, literature, cinema, and even in such areas of life as marriage, child-rearing, relations between men and women, and living arrangements.

On the "Home" Front

Historians have recently begun to look more closely at how the political and military challenges during the Cold War influenced social life and material culture. Overall, the social keynote of the times was high anxiety. Skimming the pages of the Los Angeles Times for the year 1948, for example, gives one a sense that America was being confronted by wave after wave of internal threats, not just external ones such as the Soviet blockade of West Berlin and its opposition to the Marshall Plan for rebuilding Europe.

Science was seen as both a progressive tool for achieving a bright future and a death-dealing weapon that might end human life. Fear of an atomic apocalypse affected culture and politics. Cold War movies dealt with political espionage, like The Red Menace, and nuclear anxieties, like Seven Days in May, The Bedford Incident, and Dr. Strangelove.

LA Times reports in the summer of 1948 on the phenomenon of smog were saturated with anxiety. American cars and industry had "manufactured" the modern, liberated lifestyle. But they had also "manufactured" a new threat: mysterious toxic clouds that threatened, like the atomic bomb, with little advance warning, that might blanket the city and cause widespread deaths. The newspaper proposed a smog "early warning system" (akin to the Civil Defense warning system for nuclear attack) as well as a variety of technological fixes.

The LA Times reported Elizabeth Bentley's revelations about a Communist spy ring to a Congressional committee alongside other disturbing news. A crippling port strike in Los Angeles grew more complicated when the union, part of the CIO, conducted internal purges of high-level officials accused of being clandestine Soviet agents. Turing the page of the Times, an ad for Admiral televisions promised to keep children safe at home. A reported rise in juvenile delinquency and crime appeared to threaten the institution of the family, with commentators identifying threats from outside (or at the margins of) society as well as threats from within.

Throughout the period, debates over various solutions to social problems centered on what was "truly American." This included the push for civil rights, for extending women's rights and roles outside the home, and for expanding government welfare programs. Singer Paul Robeson, for example, after a visit to the Soviet Union, made public statements that African Americans should prefer the Soviet system; N.A.A.C.P. President Roy Wilkins and baseball star Jackie Robinson vigorously disagreed.

The U.S. and the U.S.S.R. competed against each other during the Cold War in all realms. Each country offered its own culture (or at least what it wished to showcase) to the rest of the world as evidence of its superiority. Thus, the notion of being "true American" overlapped with enthusiasm for international sports teams, dance troupes, orchestras, bands, automobiles, tractors, soft drinks, and even kitchen appliances.

The Red Scare: Real and/or Imagined?

On the one hand, much of the "pro-American" and "anti-Communist" phenomena of Cold War culture during the "Red Scare" was bizarre, comical, and in some cases (such as the McCarthy hearings) downright dangerous. On the other hand, recent historical work on the Cold War has taken into account the extent of the Soviet Union's espionage activities, made public after the opening of the KGB archives and the dissolution of the Soviet Union. These revelations have demonstrated the widespread Soviet successes in America from the 1920s through the end of the Cold War and documented the real presence of sympathizers and spies among U.S. government employees. They also show Soviet funding for a range of political and social activist groups most of whose rank and file members never thought of them as anything but independent, homegrown, and purely "American."

Inside of membership card of Communist Party U.S.A.