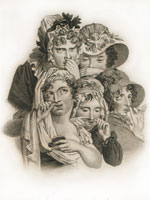 I recently read that nasal snuff was initially popular because it allowed one to drown out unpleasant smells of people not bathing and of piled up sewage. Is it true that a few hundred years ago cities stank all the time?

The claim about snuff is doubtful, or at least exaggerated, but yes, cities did often stink. A modern urban dweller, traveling back in time, but remaining in the same place, might well be bowled over by the olfactory experience.

What Snuff Was Used For

In 1494, a friar who accompanied Columbus on his 2nd voyage noted that the Indians they encountered used tobacco in two ways. The first was by smoking it through a cane pipe, the end of which they placed into their mouths. The second was by inhaling powdered tobacco through the pipe directly into their noses—“which purges them very much,” according to the friar. The European explorers took up both practices, of smoking and snuffing, and spread them simultaneously worldwide.

An anonymous poem published in London in Read’s Weekly Journal in 1761, entitled, “Six Reasons for Taking a Pinch of Snuff,” begins with the verse: “When strong perfumes, and noisome scents,/ The suf’fring nose invade,/ Snuff, best of Indian weeds, presents/ Its salutary aid.”

Popular medical theory of the day attributed many diseases to ill winds or “miasmas” of various kinds, so good odors in the nose, introduced by way of perfumed handkerchiefs, powdered wigs, incensed smoke, or scented snuff, were thought to be able to block or counter illnesses.

Despite this, the popularity of snuff was not due solely, or even primarily, to its usefulness in drowning out unpleasant smells. Users of the 17th and 18th century waxed particularly poetic about snuff’s own palette of scents, its ability to promote fellowship and sociability among friends and strangers, and the physiological effects consequent upon imbibing nicotine, but without the smoke.

The Delicate Subject of Body Odor

Personal cleanliness has long been seen as a social virtue, as a way to be polite to others. Consequently, failure in this has been regarded as an offense against others. Steps toward cleanliness were also seen as steps toward gentility, as progressive steps advancing in social class, as distinguishing oneself from the lower classes. Until fairly recently, in urban America, washing one’s body, like washing one’s clothes, has been more fastidiously attended to the higher up the scale of social class in which one has found oneself. Keeping oneself and one's living space clean is easier, too, if one can hire servants to do the chores, and if one does not engage in heavy physical labor in order to make a living, and if one can afford a place to live that has indoor plumbing.

The considerable animus against immigrants that was especially strong in the 19th century led to a presumption that odorlessness would be one desired outcome of immigrants' assimilation into American society. The elimination of body odor was part of that, it also referred to exotic perfumes, as well as the smells of ethnic cuisine, especially its characteristic spices and aromatic vegetables, in various city neighborhoods.

The raft of related social reform movements that began in the U.S. at the beginning of the 19th century included hygiene, considering cleanliness as a kind of moral virtue, embodying the cleanliness of the soul, and purifying the body politic. The emission of body odors signaled a moral lapse, an assault on others’ privacy and personal space. The antidote was cold water, applied liberally to the system, inside and outside. In the 20th century, widespread military service introduced people to an enforced regimen of soap and water that they continued when they returned to civilian life.

Changing over time as well has been the conventional judgment of whether the larger society has the right or obligation to demand personal cleanliness, to purify those who offend against the nose, and even to exclude them from public places. Advertising for personal hygiene products demonstrates that the public was progressively sensitized, from about 1920 to 1960, to more stringent social stigmas attached to emitting body odors of various kinds, most especially underarm odor and bad breath. The basic message was that if you had such odors, you had no hope of landing a desirable mate.

Smells of the City

City smells used to be a lot more pungent than they are today. Humans shared their space with populations of horses, pigs, cows, and chickens. Visitors to Cincinnati in the early 1800s, for example, often wrote about the omnipresence of semi-feral pigs that wandered through the streets, adding to the odor of the enormous pork processing industry of the city.

It was not until the early 19th century that many people had the notion that public cleanliness—as a measure against garbage in the street, offal, noxious effluvia from industrial processes going on right in the midst of the city, and polluting smoke—was something that civil authorities should attempt to police. This resulted in street paving, public water supplies to individual dwellings, municipal garbage collection, waste treatment plants, and industrial zoning regulations.

Nevertheless, civil authorities did not consider odor to be the prime offender to public peace. Metropolitan municipalities in the 19th century were spurred to clean up their cities in order to combat the spread of disease, especially at first in port cities such as New York, Philadelphia, San Francisco, and New Orleans. These cities were periodically afflicted by cholera, yellow fever, smallpox, and typhoid. The abatement of odors was a byproduct, rather than a goal, of these efforts.

E. R. Billings, Tobacco: Its History, Varieties, Culture, Manufacture and Commerce, with an account of its various modes of use, from its first discovery until now. Hartford, Conn.: American Publishing Company, 1875.