Listen to, read, and sing sources from the Gilded Age canvassing women, religion, and more.

Illinois During the Gilded Age

Illinois During the Gilded Age 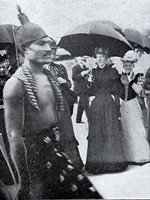 The site can also be explored through eight historical themes, each with an interpretive essay, a bibliography, a search feature for related primary documents, and a list of related video lectures. The themes are: economic development and labor, labor, law and society, political development, race and ethnicity, religion and culture, settlement and immigration, and women's experience and gender roles. In addition, eight essays cover important periods: 1866-1868 (war's aftermath), 1869-1872 (the Chicago Fire), 1873-1876 (the Panic of 1873), 1877 (The Great Strike), 1878-1884 (Immigration, Labor, and Politics), 1884-1891 (Haymarket and Hull House), 1892-1895 (1893 Chicago's World Fair), and 1896 (The Cross of Gold). The "Teacher's Parlor" has nine lesson plans, including the WCTU and the lynching controversy, civil service reform, bimetallism, and free trade.

Foreign Relations of the United States (FRUS), 1945-1972
"Join or Die"
Linus Pauling and the Race for DNA: A Documentary History
Probing the Past
Digital Vaults
The Origins of the Service Flag