Learn about the 20th century resurgence of fiddle music and Appalachian folk culture.

Fiddle Tunes of the Old Frontier: The Henry Reed Collection 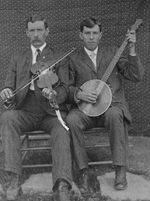 Henry Reed of Glen Lyn, Virginia, was a legendary fiddler of traditional Virginia Appalachian folk tunes. In 1966 and 1967, folklorist Alan Jabbour recorded Reed's music, and the American Folklife Center of the Library of Congress makes 184 of these sound recordings available through this American Memory online exhibit. The sound recordings are accompanied by 200-250-word descriptions of the history and origins of each musical piece, along with information regarding the features, genre, instrumentals, performers, location, and date of each recording. The site also includes 19 pages of field notes and images and transcripts listing the songs, including bullet-point notes about Reed's life and musical contributions. There are 69 transcriptions of musical pieces with roughly 150-word descriptive notes on the tune histories and musical features. A 3500-word essay about Reed's life and influence on fiddle music includes eight photographs. A bibliography lists over 200 related scholarly and journalistic publications on Reed's music and folk music in general, and the site also includes a list of approximately 70 musical terms. This site is ideal for investigating American folk culture and music, as well as the 20th-century resurgence of fiddle music.