Printed materials preserve the public campaigns of the Anti-Saloon League from 1893 to 1933. 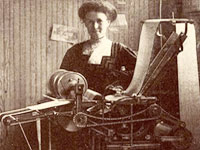 These printed materials are representative of the public campaigns of the Anti-Saloon League from 1893 to 1933. A six-page history of the League and the Temperance movement and six biographical essays of movement leaders provide context. Facsimiles of 89 fliers produced by the League advocate temperance with arguments that include the effect of alcohol on puppies and German Emperor William II's opinion of drinking. A periodical section reproduces three covers, three sample articles, and one complete 1912 issue of American Patriot, a temperance magazine, and one cover of American Issue.

Other material includes 14 wet and dry maps of the U.S. produced by the League, three temperance anthems, transcriptions of nine anti-alcohol stories, and 12 pro-temperance cartoons. In addition, six entries from the Standard Encyclopedia of the Alcohol Problem, published between 1925 and 1930, offer the Temperance perspective on communion wine, whiskey production, and alcohol use in China.