Presents 100 milestone documents in American history, from the Richard Henry Lee Resolution of June 7, 1776, to the Voting Rights Act of 1965. 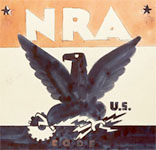 A cooperative effort, this online repository presents 100 milestone documents in American history. The first document is the Richard Henry Lee Resolution of June 7, 1776, proposing independence for the American colonies. The last is the Voting Rights Act of 1965. In between, visitors will find Eli Whitney's 1794 cotton gin patent, the 1862 Pacific Railway Act, and the 1896 Plessy vs. Ferguson ruling.

Additional documents include the 1882 Chinese Exclusion Act, Keating-Owen Child Labor Act of 1916, and orders and addresses by several presidents, including Franklin Delano Roosevelt and Dwight D. Eisenhower. There is a full-page scan and transcription of each document. In addition to the chronological list of 100 documents, the site includes a "People's Vote." Of the 100 documents, Americans voted the Declaration of Independence number one, followed by the Constitution and the Bill of Rights.

Fashion Maven
"Mapping" Primary and Secondary Sources
Now What a Time : Blues, Gospel, and the Fort Valley Music Festivals, 1938-1943
Say it Plain: A Century of Great African American Speeches
Foreign Relations of the United States (FRUS), 1861-1960
Significant Changes in Teaching History over the Past Decade