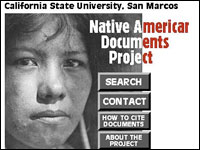 These four collections of data and documents address Federal Indian policy in the late 19th century. The first set includes eight annual reports of the Commissioner of Indian Affairs from the 1870s, along with appendices and a map. The second set, Allotment Data, traces the Federal "reform" policy of dividing Indian lands into small tracts for individuals—a significant amount of which went to whites—from the 1870s to the 1910s. This set includes transcriptions of five acts of Congress, tables, and an essay analyzing the data.

The third set includes 111 documents on the little-known Rogue River War of 1855 in Oregon, the reservations set up for Indian survivors, and the allotment of one of these reservations, the Siletz, in 1894. The fourth set provides the California section of an ethnographic compilation from 1952.