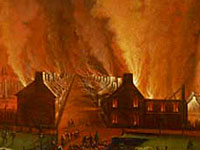 Who started the Quebec City fire of June 28, 1845? It was depicted in an 1848 painting by Joseph Légaré called The Fire in the Saint-Jean Quarter, Seen Looking Westward. My art teacher mentioned something about a slave breaking out of her master's home, and being so angry she burnt down their house and started the fire. She wound up being hung. Is this true?

I have been unable to find anything about an angry slave being responsible for the fire. And what I have found appears to make such a story highly unlikely.

On the 28th of May, in the late morning of a scorchingly hot day, a fire began at a small tannery owned and overseen by a Mr. Richardson on Arago Street near Saint-Vallière Street in the St.-Roch district. The fire began when a boiler that was used to heat leather dye burst. Church bells in the St.-Roch section began ringing in alarm and a small crowd gathered outside the tannery and started “ill-directed efforts to extinguish the flames,” according to a military officer who happened onto the scene.

The intense heat of the day, combined with a very stiff wind, spread the fire quickly through the streets of St.-Roch, lined with small wooden buildings packed closely together. The district of St.-Roch lies in the lower section of the city between the river and a cliff leading to the upper section of Quebec City. The high wind blew into the heated air above the fire and swirled against the cliff into a shifting vortex that carried sparks in unpredictable directions, seemingly in pursuit of terrified people trying to escape the fire, blocking their escape. The fire was only stopped when the mayor ordered the military to blow up a line of houses as a firebreak to protect the warehouses and commercial district next to the river. In eight hours, the fire of May 28 killed 50 people, destroyed about 3,000 shops and sheds, roughly 1,650 houses, and left many thousands of people homeless. About a third of the city was left in ruin.

About 11 o’clock on the night of June 28th, another fire broke out in a shed in back of the house of a notary, M. Texsier, on d'Aiguillon Street, near d'Youville Street in the Saint-Jean Baptiste section of the city, which is located next to the St.-Roch section that had been destroyed the month before. According to the Quebec Mercury at the time, the fire “arose from the emptying of a can of hot ashes on a dunghill.” This strongly suggests that the fire was not deliberately set.

As before, the weather had been hot and dry that day and a gale wind once again blew over the city. Throughout the night of June 28th, the fire spread out and by morning the entire St.-Jean section, another third of the city, along with 1,300 houses, churches, and schools, had been destroyed. During the night, thousands of people who had fled the St.-Roch fire and had settled temporarily in the St.-Jean section again had to flee.

Joseph Légaré’s painting of this fire, a copy of which is now in the Art Gallery of Ontario, depicts “an apocalyptic vision of orange flames and fiery sparks heat[ing] up the black sky in an earthly inferno,” as art historian Anne Newlands says in her book, Canadian Art: From Its Beginnings to 2000. Many of the terrified residents the night of that fire did indeed see something like an apocalypse, a providential pursuit of the city. Newspapers reported that many people saw terrible angels of flame in the sky above the city that night, which skeptics attributed to reflected mirages playing across the layers of heated air. One month later, practically the entire city stayed awake and on edge during the day and night of July 28th, on the possibility that Quebec would be revisited by a third and final fire. But that did not happen.

In all, the two fires destroyed two-thirds of the city, but I have found no evidence that either of the fires was caused by anything other than accidents.