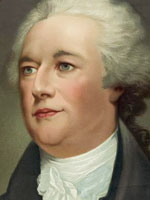 How did the debate between Jefferson and Hamilton shape the political system of the United States?

In George Washington’s Farewell Address (1796), the retiring president warned that the creation of political factions, “sharpened by the spirit of revenge,” would most certainly lead to “formal and permanent despotism.” Despite Washington’s cautionary words, two of his closest advisors, Thomas Jefferson and Alexander Hamilton, helped to form the factions that led to the dual party system under which the U.S. operates today. Other men, most notably James Madison and John Adams, also contributed to the formation of political parties, but Hamilton and Jefferson came to represent the divisions that shaped the early national political landscape.

Although both men had been active in the Revolutionary effort and in the founding of the United States, Jefferson and Hamilton did not work together until Washington appointed Jefferson the first secretary of State and Hamilton the first secretary of the Treasury. From the beginning, the two men harbored opposing visions of the nation’s path. Jefferson believed that America’s success lay in its agrarian tradition. Hamilton’s economic plan hinged on the promotion of manufactures and commerce. While Hamilton distrusted popular will and believed that the federal government should wield considerable power in order steer a successful course, Jefferson placed his trust in the people as governors. Perhaps because of their differences of opinion, Washington made these men his closest advisors.

Hamilton’s economic plan for the nation included establishing a national bank like that in England to maintain public credit; consolidating the states’ debts under the federal government; and enacting protective tariffs and government subsidies to encourage American manufactures. All of these measures strengthened the federal government’s power at the expense of the states. Jefferson and his political allies opposed these reforms. Francophile Jefferson feared that the Bank of the United States represented too much English influence, and he argued that the Constitution did not give Congress the power to establish a bank. He did not believe that promoting manufactures was as important as supporting the already-established agrarian base. Jefferson deemed “those who labour in the earth” the “chosen people of God . . . whose breasts he has made his peculiar deposit for substantial and genuine virtue.” He advised his countrymen to “let our work-shops remain in Europe.”

When George Washington’s administration began, the two camps that formed during the Constitutional ratification debates – those groups known as the Federalists and Anti-Federalists – had not yet solidified into parties. But, disagreements over the nation’s direction were already eroding any hope of political unity. In May of 1792, Jefferson expressed his fear to Washington about Hamilton’s policies, calling Hamilton’s allies in Congress a “corrupt squadron.” He expressed fear that Hamilton wished to move away from the Constitution’s republican structure, toward a monarchy modeled after the English constitution. That same month, Hamilton confided to a friend that “Mr. Madison cooperating with Mr. Jefferson is at the head of a faction decidedly hostile to me and my administration, and . . . dangerous to the union, peace and happiness of the Country.”

By the time Jefferson and John Adams vied for the presidency in 1796, political factions had formed under the labels “Republicans” and “Federalists.” In fact, by 1804 the advent of political parties necessitated a constitutional amendment that changed the electoral process to allow president/vice president tickets on the ballot. The Federalists dominated the national government through the end of the 18th century. Despite President Washington’s efforts at unity, political differences proved to be too deep to promote consensus. The Republican Party emerged as organized opposition to Federalist policies, and despite Jefferson’s assurances in his first inaugural address that Americans were “all republicans” and “all federalists,” faction had solidified into party.

Thomas Jefferson to George Washington, May 23, 1792 and Alexander Hamilton to Edward Carrington, May 26, 1792 in Jefferson vs. Hamilton: Confrontations that Shaped a Nation, ed. by Noble E. Cunningham, Jr. Boston: Bedford St. Martins Press, 2000.

Staloff, Darren. Hamilton, Adams, Jefferson: The Politics of the Enlightenment and the American Founding. New York: Hill and Wang, 2005.