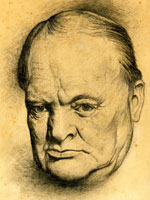 How was the Second World War likely to end if the U.S. hadn't intervened? Who seemed to be winning the war before the U.S. joined after the Pearl Harbor attack? Would the Allies have been able to prevail without U.S. help?

During the months preceding the attack on Pearl Harbor, the war in Europe had essentially boiled down to a contest between the Axis Powers of Germany and Italy, and against them, the Soviet Union and Great Britain.

Hitler had decided to postpone a cross-channel invasion of Britain itself until his armies were able to defeat the Soviet Union, but Germany was still fighting Britain through aerial and missile bombing, and was engaged against Britain on the seas, as well as elsewhere in the British Empire, as in North Africa. In South Asia, Britain was also defending its colonies and commonwealth against Japan. On the face of it, especially in the long term and even with Lend-Lease aid from the United States, it is difficult to see how Britain could have continued the war without the entry of the United States into the conflict on its side. Presumably, Winston Churchill would have had to sue for peace, or endure a German invasion of the British Isles once the Nazis had consolidated their military strength in Europe.

That did not happen, of course. After Churchill heard that America had been attacked at Pearl Harbor, he rushed to a secure telephone to call Franklin Roosevelt. His Memoirs of the Second World War relate the following:

In two or three minutes Mr. Roosevelt came through. "Mr. President, what's this about Japan? "It's quite true," he replied. "They have attacked us at Pearl Harbor. We are all in the same boat now."

No American will think it wrong of me if I proclaim that to have the United States at our side was to me the greatest joy. I could not foretell the course of events. I do not pretend to have measured accurately the martial might of Japan, but now at this very moment I knew the United States was in the war, up to the neck and in to the death. So we had won after all!

Yes, after Dunkirk; after the fall of France; after the horrible episode of Oran; after the threat of invasion, when, apart from the Air and the Navy, we were an almost unarmed people; after the deadly struggle of the U-boat war—the first Battle of the Atlantic, gained by a hand's-breath; after seventeen months of lonely fighting and nineteen months of my responsibility in dire stress. We had won the war. England would live; Britain would live; the Commonwealth of Nations and the Empire would live.

How long the war would last or in what fashion it would end no man could tell, nor did I at this moment care. Once again in our long Island history we should emerge, however mauled or mutilated, safe and victorious. We should not be wiped out. We should not be wiped out. Our history would not come to an end. We might not even have to die as individuals. Hitler's fate was sealed. Mussolini's fate was sealed. As for the Japanese, they would be ground to powder.

United States forces played a direct role in defeating Germany, but also forced Hitler to keep huge military forces in Western Europe rather than sending them to reinforce his armies fighting against the Soviet Union, where they would likely have been a decisive factor against the Soviets. Instead, the German invasion of Russia failed after the effort that culminated at Stalingrad, and the German forces in Western Europe were eventually pushed back anyway, beginning with the landings at Normandy.

One of the delights of the alternate history genre of fiction is that its authors generally expend some considerable effort on the notion of history itself.

Your questions are hypothetical. They invite speculation. One of the delights of the alternate history genre of fiction is that its authors generally expend some considerable effort on the notion of history itself, especially the way in which history unwinds out of a skein of causes both large and small. In these novels, large and familiar causes and conditions and forces roll out across the world, but small human details, such as a missed appointment at the Reichs Ministry, an overlooked telegram, Hitler's mistress Eva Braun's choice of perfume on a fateful day, or a random batch of sunspots that interferes with a particular radio transmission, sometimes cascade into a vastly different history than the one with which we are familiar.

Philip K. Dick, The Man in the High Castle (1962), in which Nazi Germany and Imperial Japan win World War II. The East Coast and Midwest of the United States are occupied by Germany and the West Coast by Japan.

Harry Turtledove, In the Presence of Mine Enemies (2003), in which the U.S. does not enter the war, and the Axis Powers win. Germany then bombs the U.S. in the 1970s with nuclear weapons and defeats it.

Robert Harris, Fatherland (1992), another one in which Germany wins the war, although the U.S. defeats Japan.

Norman Spinrad, The Iron Dream (1972), which is presented as a science fiction novel written by pulp-fiction artist Adolf Hitler after he flees Germany to live in the United States after the end of the First World War.

Jo Walton’s "Small Change" series [Farthing (2006), Ha’penny (2007), and Half a Crown (2008)], in which the U.S. fails to provide aid to the UK to resist Germany and Britain makes peace with the Nazi Reich. Germany continues a drawn-out war with the Soviet Union, and Britain turns into a fascist state.

Newt Gingrich and William R. Forstchen, 1945 (1995), in which the U.S. defeats Japan but not Germany, and a subsequent "cold war" ensues between the U.S. and Germany.

History of the Occult in America
Tennessee's Social Studies Curriculum
Why Did President Polk Want War with Mexico?
Team Ships
Without Sanctuary: Photographs and Postcards of Lynching in America
IWitness