Forty Acres and a Mule 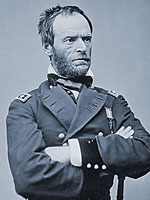 I'm trying to find a map of the land Sherman set aside in Special Field Order No. 15. I wanted to be able to make a transparency to show students what we are talking about before we delve deeper into what took place. I have no problem getting the text of the order, but even my school librarians had difficulty with this.

I have not found a map of it either, but that may be partly because the field order itself was ambiguous about the area as well as about what exactly it authorized.

General William Sherman issued Special Field Order No. 15 from his temporary headquarters in Savannah on January 16, 1865. It defined an area along the coast north and south of where he had encamped his army: “The islands from Charleston south, the abandoned rice fields along the rivers for thirty miles back from the sea and the country bordering the St. John River, Florida.” A broad interpretation of this would take it to include a continuous 30-mile-wide swath of land extending along the coast south from Charleston, South Carolina, as far as Jacksonville, Florida, and including all the Sea Islands. I have cropped a section of an 1854 map from Wells’ McNally’s System of Geography and tinted this area light red.

This is the region of South Carolina, Georgia, and Florida that is known as the “low country.” You can show your students why it is called that by looking at the satellite version of the Google map for the region, which shows that it is a deep shade of green.

It is flat and almost entirely just above sea level. It was an area where large rice plantations flourished. Growing rice was an extremely labor intensive occupation and the plantation owners owned many slaves. The slave population of the area therefore far exceeded the white population, which, of course, constituted the landholders.

From the North’s point of view, it was not only the epicenter of the most egregious form of the unjust slave system, wherein a large number of black slaves labored entirely for the profit of white slave owners, but it was also (not coincidentally) the epicenter of the secession movement that precipitated the beginning of the war at Fort Sumter.

The purpose of Sherman’s order was to set aside a large area within which freed blacks could be settled. The area came to be popularly known as the “Sherman Reservation.”

Sherman had defined a general area, but his wording was somewhat ambiguous. He clearly set aside all the Sea Islands, but within the coastal swath of land, he appears to have been aiming to confiscate—and make available for settlement—only the plantations along the rivers and other “abandoned” lands. Nevertheless, Congress had earlier decided that all land and property of men who were fighting for the Confederacy (or even the property of others who had supported or conducted business with Confederate forces or authorities) had been technically “abandoned,” even if their families were still on the land, making it eligible for confiscation by the Federal government. This would have vastly expanded the land reckoned to be available for settling freed blacks, even if Sherman’s order was originally interpreted to apply only to the islands and the land along the rivers (rather than the entire 30-mile-wide swath of land).

Sherman wrote a letter to President Andrew Johnson on February 2, 1866, explaining the origin of his field order. It was published in The New York Times the following day and was undoubtedly meant for public consumption:

The Hon. E. M. Stanton, Secretary of War, came to Savannah soon after its occupation by the forces under my command, and conferred freely with me as to the best methods to provide for the vast number of negroes who had followed the army from the interior of Georgia, as also for those who had already congregated on the islands near Hilton Head, and were still coming into our lines. We agreed perfectly that the young and able-bodied men should be enlisted as soldiers, or employed by the Quartermaster in the necessary work of unloading ships, and for other army purposes. But this left on our hands the old and feeble, the women and children, who had necessarily to be fed by the United States. Mr. Stanton summoned a large number of the old negroes mostly preachers with whom he had long conference, of which he took down notes. After the conference he was satisfied the negroes could, with some little aid from the United States, by means of the abandoned plantations on the Sea Islands and along the navigable waters take care of themselves. He requested me to draw up a plan that would be uniform and practicable. I made the rough draft and we went over it very carefully. Mr. Stanton making many changes, and the present Orders No. 15 resulted and were made public.

I know of course we could not convey title to land and merely provided “possessory” titles to be good so long as war and military power lasted. I merely aimed to make provision for the negroes who were absolutely dependent on us, leaving the value of their possessions to be determined by after events or legislation.

At that time, January, 1865, it will be remembered that the tone of the people of the South was very defiant, and no one could foretell when the period of war would cease. Therefore I did not contemplate that event as being so near at hand.

President Johnson was about to begin pardoning ex-Confederates and restoring the property the Federal government had confiscated from them, provided that they took an oath of allegiance to the U.S. The whites who had original title to land in “Sherman’s Reservation” petitioned the President to recognize their titles and give them back full possession. Sherman’s letter emphasized that he had had no authority to give full title to the land covered in his field order, but only a temporary or “possessory” title to it, under his wartime military authority, and he implied that he would not have issued the order if he had known that the war was about to end.

Johnson Restores Much of the Land to the Original Owners

Sherman’s explanation provided justification for Johnson’s order to the Freedmen’s Bureau, which had been liberally setting up black settlements in the area, with each family receiving “forty acres and a (leased army) mule.” Much to the dismay of the Freedmen’s Bureau, of the military officer General Rufus Saxton who Sherman had put in place to implement his order—and of course to the African Americans who had been resettled into the area—Johnson ordered the restoration of the land to the original owners.

Edwin Stanton, Lincoln’s Secretary of War, had traveled to Savannah to meet with Sherman at the time the General had issued his order, and appears to have approved it orally, but not formally, in the sense that he did nothing to countermand it. Stanton’s biographer, Frank Abial Flower, wrote, of the order:

Stanton, on reading it, said to Sherman: “It seems to me, General, that this is contrary to law.” Sherman’s response was: “There is no law here except mine, Mr. Secretary.” Stanton smiled and the order was issued a day or two after he left for the North. General Saxton says Stanton was opposed to the order, but acquiesced in its promulgation in deference to the positive wishes of General Sherman.

On the face of it, Stanton's implied reluctance seems unlikely, because, as Sherman explained, the plan had suggested itself to Stanton and Sherman after they met in Savannah with a group of African American clergy who had asked for relief from the government for the many thousands of ex-slaves who were then in the area, either because they had originally resided there or because they had followed Sherman’s army across the South.

When the notion of establishing them on abandoned or confiscated lands came up for discussion, almost all of these clergy urged that military forces be used to settle them in areas in which all whites would be prohibited from entering, as a way to protect the settlements from white encroachments. Militarily, this could be most efficiently accomplished by designating the Sea Islands and the low lands along the rivers as the places to settle.

A Pledge of Government Reparations?

Some of the most radical members of Congress were delighted by this. Indeed, several had expressed their desire as the war ended to hang everyone who had been in the Confederate armies, to confiscate all their property, including their land, and to redistribute it all permanently to ex-slaves, recreating the South as a kind of African American preserve from which Southern whites would be barred—a plan that today would be called “ethnic cleansing.”

After the war ended, the contentious results of Sherman’s field order arose as the Federal government sorted out how it would deal permanently with what Sherman had instituted primarily as a military expedient—to free his forces from the burden of caring for refugees as he moved his armies north into the Carolinas. Historian Jacqueline Jones, in Saving Savannah, summed up Sherman’s original goal:

Ultimately, then, Special Field Order No. 15 grew out of the refugee problem, which, in the words of one Union officer, “left on our hands the old and feeble, the women and children,” too many hungry mouths to feed in the city of Savannah. … The order made explicit the connection between military service for men and homesteads for their families, and it provided not for fee-simple titles, outright ownership of the land, but rather possessory titles that remained contingent on future political developments. The order itself remained “subject to the approval of the President.” What came to be called the Sherman Reservation, then, was a means of draining Savannah of women, children, and the elderly while providing for enforced service among young men. This initial goal foreshadowed the order’s troubled future.

Down to our own time, the confused and conflicted intentions and authorities that informed the issuance of Field Order No. 15 and its later implementation and revocation, have been the focus of the claim of precedent for government reparations to ex-slaves and then to their descendants.

Text of Special Field Order No. 15, at the Freedmen & Southern Society Project at the University of Maryland.