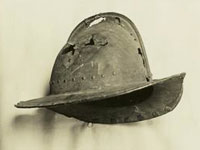 I am teaching The Scarlet Letter in my AP Literature class and need some higher-level resources that discuss the Puritan lifestyle, from dress to their interactions with natives to their belief systems. Do you know of several resources?

On the material culture of Plymouth Colony, including descriptions of housing, furniture, clothing, and family life and relationships, you could look at John Demos, A Little Commonwealth: Family Life in Plymouth Colony, or his, Remarkable Providences: Readings on Early American History. Also good is David Hackett Fischer, Albion’s Seed: Four British Folkways in America, section on “The Exodus of the English Puritans, 1629-41.”

Easily the most influential book about the New England Puritans' religion has been Perry Miller's 1956, Errand into the Wilderness. More recent and well-regarded books include Sacvan Bercovitch, The Puritan Origins of the American Self and David D. Hall, Worlds of Wonder, Days of Judgment: Popular Religious Belief in Early New England.

Also online, you can find plenty to read and assign in volumes 1 and 2 of A Library of American Literature, edited by Edmund Stedman and Ellen Hutchinson, and compiled and published in 1887, and which is available via Google Books. The editors included diverse short selections from Puritan writers describing their inner and outer lives and their adventures in settling in America.

A newer anthology of Puritan writings, focusing exclusively on religion (and not available on the web), is The Puritans in America: A Narrative Anthology, edited by Alan Heimert and Andrew Delbanco, published in 1985 by Harvard University Press.

Teaching The Scarlet Letter and also reading historical works from and about the Puritans provides an opportunity to emphasize to students that Hawthorne's work was one of historical fiction, written almost two centuries after the events it imagined. Students can easily understand that the book is fiction because the specific people and events its described did not actually exist. They may need some help, however, in understanding that Hawthorne's Puritan world might differ from the real Puritans' world, or in understanding that Hawthorne's fictional enterprise was deeply imbued with mid-19th-century sensibilities and preoccupations. A 17th-century Puritan would never have written a book like it.