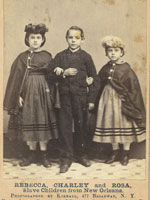 I'm writing a story and I would like to know how someone in the South would have gone about selling a slave. What if you had only one to sell? Surely you couldn't hold a whole auction just for one. What would you do?

Most likely, the slave owner would let neighbors, friends, and extended family know that the slave was for sale and hope that a buyer could be found through this informal networking. They might also put up a notice in local stores, or take out an ad in the local newspapers. Or they might bring the slave to an informal local venue where people met together from time to time to buy and sell slaves. Another way to sell the slave would be to look for an itinerant slave dealer who was traveling through the area, buying a few slaves here and there and transporting them somewhere he thought he could find a market for them.

But what the owner could not do was sell their slave to someone in a neighboring slave state, unless that state had not yet prohibited the importation of slaves. As early as 1778, slave states, starting with Virginia and Maryland, made it illegal to import slaves from elsewhere. From that time on, residents of those states sold their “excess” slaves to newer slave states farther south, which still “needed” slaves.

An article entitled, “The Restriction of the Slave Trade in the South,” in the Washington, D.C.-based African-American newspaper, The National Era, of May 3, 1849, explained it this way:

The older slave States long since found it necessary to restrict the importation of slaves, with a view of keeping down the supply of slave-labor to the point of profitable employment. … The old slave States looked to the new as the market for their surplus slaves. When the new, under the pressure of an excess of slave labor, shall close their gates against the introduction of slaves, what then will be the condition of the South? Suppose the slave population pent up within its limits, all egress prohibited, what remedy, then, for the evils resulting from an excess of labor, preying upon capital, and over-production, reducing prices? The slave States would be compelled to choose depopulation or emancipation, the loss of the white population, or the freedom of their slaves. The maintenance of slavery would result in the exclusion of the poor whites, whites of the middling classes, and, finally, all but a few overgrown slaveholders, with their innumerable hordes of black dependents; and the ultimate result of this state of things can easily be foreseen.

This is the Future, which the pro-slavery men of the South would avert, by the policy of slavery extension. Slavery-restriction between the States must be accompanied by slavery-extension into the Territories - and when these Territories shall have been converted into States, prohibiting slavery, or, if tolerating slavery, prohibiting the slave trade, then, new territories must be sought to receive the refuse slave population, the inevitable excess of slave labor. In this way, generation after generation is to be cursed, and the whole continent southwardly, not now under our control, to be acquired by the force, fraud, or money of the General Government for the purpose of eternizing the most diabolical system of oppression God's earth has ever groaned under.

Well then, why didn't they just free the slave, which was sometimes done by deed or by will? There could be several obstacles.


The slave codes of nearly all the Southern states placed restraints on slave owners regarding their attempts at the “manumission” or freeing of their slaves.

The slave codes of nearly all the Southern states placed restraints on slave owners regarding their attempts at the “manumission” or freeing of their slaves. The justification for this restraint on an owner’s “property” was that the state had the right, as explained by lawyer Jacob Wheeler in 1837, “to protect society from even the benevolence of slave owners, in throwing upon the community a great number of stupid, ignorant, and vicious persons, to disturb its peace and endanger its permanency.” But it also had the effect of discouraging slave owners from simply turning out their slaves when they became a burden to them. Typically, an owner was not allowed to free a slave if the owner had an outstanding debt (to meet which, the slave could be sold and the proceeds applied to the debt).

It was also quite common for a state to require any slave owner who wished to free a slave to apply to the state legislature for permission to do so, and to give a reason for the application, such as the slave’s meritorious service, which is to say that it was actually the state that had the power to manumit slaves, not owners.

In addition, it was a typical part of the states’ slave codes that freed slaves had to leave the state, so that they would not “disturb its peace” by fostering discontent among the local slave population or by competing with local whites for work. If freed, the slave could actually be worse off in some respect, especially if he or she was older, ill, had very limited skills, or had no other place to go. If the owner had humane feelings and the slave had been part of their household, with relatives nearby, the owner might judge that they had a responsibility to care for him or her and not put the slave in the position of having to leave the state if freed.

If all attempts to sell a slave failed, someone might also have considered hiring him or her out for a set period of time, if that person could find someone, nearby or far away, who could give them employment. Frederick Douglass gave a good description of this sort of arrangement in his autobiography.

Robert Edgar Conrad, ed., In the Hands of Strangers: Readings on Foreign and Domestic Slave Trading and the Crisis of the Union. University Park, Penn.: Pennsylvania State University Press, 2001.

Teachinghistory.org, Atlantic Slave Trade and Slave Life in the Americas: A Visual Record.

Jacob D. Wheeler, A Practical Treatise on the Law of Slavery; being a compilation of all the decisions made on that subject, in the several courts of the United States and State Courts. New York: Allan Pollock, 1837.