Innovation and Technology in the 19th Century 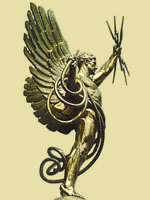 How did innovation and technology change life in the 19th century?

There were two technological innovations that profoundly changed daily life in the 19th century. They were both “motive powers”: steam and electricity. According to some, the development and application of steam engines and electricity to various tasks such as transportation and the telegraph, affected human life by increasing and multiplying the mechanical power of human or animal strength or the power of simple tools.

Those who lived through these technological changes, felt them to be much more than technological innovations. To them, these technologies seemed to erase the primeval boundaries of human experience, and to usher in a kind of Millennial era, a New Age, in which humankind had definitively broken its chains and was able, as it became proverbial to say, to “annihilate time and space.” Even the most important inventions of the 19th century that were not simply applications of steam or electrical power, such as the recording technologies of the photograph and the phonograph, contributed to this because they made the past available to the present and the present to the future.
The 1850 song, “Uncle Sam’s Farm,” written by Jesse Hutchinson, Jr., of the Hutchinson Family Singers, captured this sense that a unique historical rupture had occurred as a result of scientific and social progress:

Our fathers gave us liberty, but little did they dream
The grand results that pour along this mighty age of steam;
For our mountains, lakes and rivers are all a blaze of fire,
And we send our news by lightning on the telegraphic wires.

Apart from the technological inventions themselves, daily life in the 19th century was profoundly changed by the innovation of reorganizing work as a mechanical process, with humans as part of that process. This meant, in part, dividing up the work involved in manufacturing so that each single workman performed only one stage in the manufacturing process, which was previously broken into sequential parts. Before, individual workers typically guided the entire process of manufacturing from start to finish.

This change in work was the division or specialization of labor, and this “rationalization” (as it was conceived to be) of the manufacturing process occurred in many industries before and even quite apart from the introduction of new and more powerful machines into the process. This was an essential element of the industrialization that advanced throughout the 19th century. It made possible the mass production of goods, but it also required the tight reorganization of workers into a “workforce” that could be orchestrated in various ways in order to increase manufacturing efficiency. Individuals experienced this reorganization as conflict: From the viewpoint of individual workers, it was felt as bringing good and bad changes to their daily lives.

On the one hand, it threatened the integrity of the family because people were drawn away from home to work in factories and in dense urban areas. It threatened their individual autonomy because they were no longer masters of the work of their hands, but rather more like cogs in a large machine performing a limited set of functions, and not responsible for the whole.

On the other hand, it made it possible for more and more people to enjoy goods that only the wealthy would have been able to afford in earlier times or goods that had never been available to anyone no matter how wealthy. The rationalization of the manufacturing process broadened their experiences through varied work, travel, and education that would have been impossible before.