On Gendering the Constitution 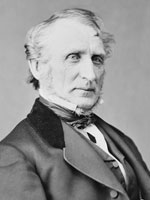 Do you have any primary source documents from John Bingham that show why he chose to include only males in the 14th Amendment, any copies of speeches he made on the topic, etc.? Also do you have any source documents from Susan B. Anthony that take the opposite view of why women should be included? My daughter is completing a National History Day project and these two are critical to her performance.

I’m not sure how to answer this. I wouldn’t want to take anything away from your daughter’s project by doing her research for her. But the subject is complicated and I think I can say a few things that might help with her research.

The issues around the passage of the 14th Amendment, as they appeared to women’s rights activists, are well covered, with transcripts of Congressional debates, and details of the petitions and organizing activities of Susan B. Anthony, Elizabeth Cady Stanton, and others, in the History of Woman Suffrage, Volume 2, Chapter 17, pages 90-151, which your daughter can read at the link. In addition, if your public library, or a nearby academic library, has online access to the ProQuest historical newspapers collection, she might find it useful to take a look at The New York Times reporting on the announcement of—and speeches given at—the 11th National Woman’s Rights Convention, held in New York City, as detailed in the articles, “Woman’s Rights. The Eleventh National Woman’s Rights Convention” (April 2, 1866) and “The May Anniversaries” (May 11, 1866).

The Purpose of the 14th Amendment

In order to supplement these sources and to more fully understand the Congressional debates over the language of the 14th Amendment, I think it is important to note that the essential purpose of the amendment was not to define the principle on which the right of suffrage was based, but rather to craft a means by which the country could be “reconstructed,” which is to say that the joint House and Senate “Committee of Fifteen” (which included Representative John A. Bingham of Ohio) that put together the language of the amendment and brought it to the Congress as a whole for a vote was recommending a way for the southern states that had seceded to be re-admitted to the Union, a very urgent issue at the time.

When they were re-admitted, these states’ representatives would have to be seated in Congress. But there was a problem with doing that: According to the Constitution, the number of slaves in the southern states had figured into the counting of the states’ population for the purpose of deciding the number of Congressional representatives from those states (the “three-fifths clause”). But with the end of the war and the passage of the 13th Amendment outlawing slavery, there were no longer any slaves to count.


it would have seemed that the South had actually been rewarded as a result of the war.

If, then, the sheer number of persons living in the southern states were now to be used to determine the number of representatives these states could send to Congress, these states would gain a very considerable advantage over what they had before the war because the ex-slaves would then be counted as “full” persons, even though, in these states, they were not allowed to vote. The result would be an actual increase in the legislative power of these states, whose strengthened congressional delegations would still be drawn from the same class of white landowners whose “retrograde” views had played a decisive role in the events leading to the war. This would have been plainly unacceptable, as it would have seemed that the South had actually been rewarded as a result of the war.

To solve this problem, the Committee of Fifteen created a condition for these states re-admittance to the Union, which is described in section 2 of the constitutional amendment it proposed:

Representatives shall be apportioned among the several States according to their respective numbers, counting the whole number of persons in each State, excluding Indians not taxed. But when the right to vote at any election for the choice of electors for President and Vice-President of the United States, Representatives in Congress, the Executive and Judicial officers of a State, or the members of the Legislature thereof, is denied to any of the male inhabitants of such State, being twenty-one years of age and citizens of the United States, or in any way abridged, except for participation in rebellion, or other crime, the basis of representation therein shall be reduced in the proportion which the number of such male citizens shall bear to the whole number of male citizens twenty-one years of age in such State.

In other words, the committee was saying, “Okay, maybe we can’t force you southern states to give Blacks the vote, but if you don’t, we’ll just deduct the Black population from your total population when counting how many congressional representatives you get, so you don’t get any advantage over us; in fact, you’ll be disadvantaged, because now you won’t be able to count your Black population at all whereas before you could count three-fifths of it (more or less) in figuring out how many congressional representatives you could have.” This seemed like a fair, if somewhat convoluted, compromise to the committee. The committee thought it would stand a good chance of being passed.

This seemed like a fair, if somewhat convoluted, compromise to the committee.

In fact, essentially the same sort of scheme had already passed Congress as part of a civil rights law, but Congressman Bingham, who was both a lawyer and a judge, was convinced that that law would be found by the courts to be unconstitutional for a number of reasons (including the fact that it infringed on the rights of states to determine which of its citizens could vote), so he had actually opposed its passage in Congress and argued that it needed to be passed as a constitutional amendment instead. That is why it was deliberated on by the Committee of Fifteen—actually called the Committee on Reconstruction—of which he was an influential member, and was proposed by it. It was part of the committee’s plan for how the southern states could be brought back into the fold: If these states’ legislatures reaffirmed their allegiance to the United States and voted to accept the conditions in the proposed amendment, then they would be re-admitted.

I cannot find a source that gives Bingham himself the responsibility for inserting the word “male” in the language of the amendment. Perhaps you have found such a source. The material in the History of Woman Suffrage appear to me to suggest otherwise, that it was simply the result of the committee’s long hours in trying to craft precise language that would do no more than what the committee intended the amendment to do, without inadvertently opening the door to a storm of objections surrounding the much larger principles of suffrage, whether it was a universal “human right” or not, that would most probably have derailed the amendment’s chance of passage.