Dr. Melissa R. Klapper is Professor of History at Rowan University, where she teaches American, Jewish, and women's history. She received her BA from Goucher College and her PhD from Rutgers University. She is the author of Jewish Girls Coming of Age in America, 1860-1920 (NYU Press, 2005) and Small Strangers: The Experiences of Immigrant Children in the United States, 1880-1925 (Ivan R. Dee, Publisher, 2007).

Hyman Capin opened the tailor shop pictured here in 1914. By that time he was already an experienced tailor who had worked for the army as well as for himself. Like many Jewish immigrants, Capin migrated more than once, going first from Lithuania to London with his family at age 12, then to New York at 18, then to Harrisburg, PA, where he met his wife Dora, then to Arizona, and then to New Mexico. In the small Southwest towns where the Capin family lived, tailors, many of them Jewish, often stocked their shelves with a variety of goods.

The hatboxes, belts, shoe boxes, and ready-made jackets and shirts on display in the photograph indicate the variety of items available in the store, which also had fitting rooms for customers ordering custom-made clothing. Jewish immigrants frequently employ their relatives, as Capin apparently did with his son-in-law. The photograph shows how formally Capin was dressed, as befit the proprietor of the shop. Capin eventually parlayed his small shop into a formidable retail operation focused on department stores and dry goods, two areas of the economy in which many immigrant Jews found success. 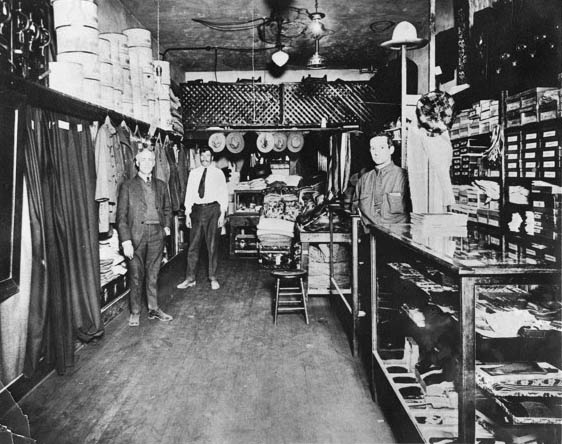