Captures significant events and personalities of the 20th century through 107 audio items, including speeches, addresses, and private telephone conversations.

History and Politics Out Loud

History and Politics Out Loud 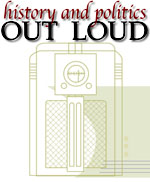 Audio materials on this website were designed to capture "significant political and historical events and personalities of the 20th century."