With over 126,000 photographs, maps, and other documents, this site offers a comprehensive look at the history of Los Angeles and southern California. 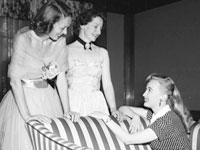 Core Historical Literature of Agriculture
Western History Photography Collection
Ancient Architects of the Mississippi
The Barbara McClintock Papers
The "Cradle" of America?
All Disquiet on the Western Front