Explore the life and works of one of the most famous revolutionaries—Thomas Paine. 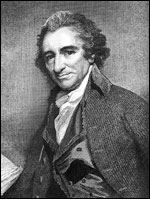 With full-text versions of seven books and essays in addition to five 19th- and early 20th-century biographies, this website presents the life and works of Thomas Paine (1737–1809). Materials include Common Sense, The Rights of Man, The Age of Reason, The Crisis Papers, "African Slavery in America," "Agrarian Justice," and "An Occasional Letter on the Female Sex." These texts are reproduced from The Complete Writings of Thomas Paine, a 1945 publication edited and annotated by historian Philip S. Foner. The site also includes Foner's section introductions and his "Chronological Table of Thomas Paine's Writings." Unfortunately, the site also includes hundreds of broken links to additional essays and letters by Paine. The biographies presented provide works published from 1819 to 1925. The site also reprints Thomas Edison's 1925 essay, "The Philosophy of Thomas Paine," in which he attempted to reawaken interest in Paine.