A variety of primary sources and background essays explore the 1911 fire, a hallmark tragedy of the industrial age. 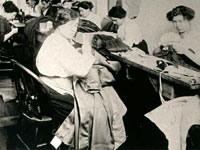 On March 25, 1911, a fire broke out at the Triangle Shirtwaist Factory in New York City causing the deaths of 148 garment workers—an event that came to be known as one of the hallmark tragedies of the industrial age. This website tells the story of the fire in six chapters: Introduction; Sweatshops and Strikes; Fire; Mourning and Protest; Relief Work; and Investigation, Trial, and Reform.

The text, targeted to a middle and high school audience, is accompanied by numerous primary sources that could be of use to more advanced researchers. These include close to 70 photographs, 18 newspaper articles, 17 testimonials, three oral histories, excerpts from investigative reports written in the years following the fire, several letters from witnesses, a lecture given by Secretary of Labor Frances Perkins in 1964, and a radio drama reenacting the event. Accompanying these primary sources is a list of victims and witnesses, a selected bibliography of works surrounding the fire, and tips for writing a paper.