Explore the politics, neighborhoods, culture, and arts of Harlem. 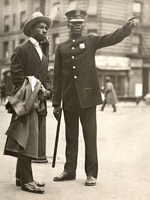 This website offers a collection of oral history interviews, images, videos, and scholarship on various aspects of the history of Harlem. It is divided into three main sections. "Arts and Culture" has six exhibits that include two video interviews focusing on Harlem's artists, writers, and musicians; oral history interviews with A. Phillip Randolph on the Harlem Renaissance and Dorothy Height on Harlem's theatrical scene; and a multimedia presentation on the Harlem Renaissance. "The Neighborhood" provides seven exhibits that include an oral-history interview with the first African American patrolman in New York City, an essay and video on the architecture and development of Harlem, an e-seminar about classic New York ethnic neighborhoods, an essay on the decline of Jewish Harlem, Bayard Rustin's reflections on different ethnic groups with economic interests in Harlem, and civil rights leader Dorothy Height's description of changes in Harlem and her attachment to the neighborhood. "Politics" offers four exhibits: oral history interviews with A. Phillip Randolph on Marcus Garvey's movement in Harlem and Bayard Rustin on Harlem congressman Adam Clayton Powell, Jr., a video lecture on Harlem politicians, and a video interview with David Dinkens on 1950s Harlem. The site also offers a short (eight images) photo essay entitled "The Streets of Harlem" and a multimedia presentation on the 1945 Negro Freedom Rally. This site offers a useful and varied collection of material for those researching or teaching Harlem or 20th-century African American history.