E=mc2. What does it mean? How has it changed society? What was Einstein's life like? 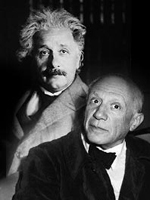 This companion website to a PBS NOVA documentary contains information about Einstein and his theory of relativity, as well as several special features. The site offers a timeline of Einstein's life from his birth in 1879 to his death in 1955, a short essay on his life before his great discovery in 1905, and an explanation of the theory behind the equation. Special features include: an essay on the legacy of Einstein's theories of special relativity and general relativity and how they affect our world; a feature exploring time dilation as predicted by Einstein's theory of relativity; and an audio feature in which 10 top physicists briefly describe Einstein's equatio. The site also offers two teacher guides: "Einstein's Big Idea" and "Einstein Revealed," 10 links to related websites, and a bibliography of eight books. Though it contains no primary source material, this site should be useful for science teachers and high school students studying Einstein, physics, and the history of science.

The Early Conservation Movement
Creating the United States
American Memory: Historical Collections for the National Digital Library
Decisive Battles in the War of Independence
African-American Experience in Ohio: From the Ohio Historical Society
The Underground Railroad