Explore cartography and the exploration of the North American continent. 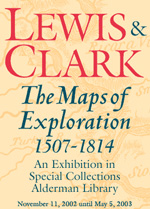 This 1995 exhibition presents approximately 70 maps designed to help "understand [Thomas] Jefferson's views of the West and the nature of the quest to the Pacific," and to "show the evolution of cartographic knowledge of North America up to the time that [Meriwether] Lewis and [William] Clark set out."

Arranged into five sections, it treats the period from the arrival of Columbus in North America to Lewis and Clark's 1803 voyage.

Well-written background essays describe relevant monographs and journals, explain the role of technology in mapmaking, and elucidate the social and intellectual contexts of Western exploration.

The site, which offers both European and American perspectives, also furnishes eight related links and a 31-title bibliography.

Particularly useful for understanding the evolution of geographic knowledge about North America and for tracing the history of cartography during this period.

LBJ Oral History Project Online
Record of Officers and Men of New Jersey in the Civil War, 1861-1865
Life After the Holocaust: Stories of Holocaust Survivors After The War
Separation of Church and State
Slave Movement During the 18th and 19th Centuries
Louisiana State Museum Jazz Collection