What did patent examiner Taft have to say on the Civil War homefront?

Washington During the Civil War: The Diary of Horatio Nelson Taft, 1861-1865

Washington During the Civil War: The Diary of Horatio Nelson Taft, 1861-1865 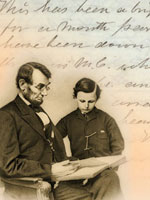 The 1,240-page Civil War-era diary of U.S. Patent Office examiner Horatio Nelson Taft is presented in both digitized images and word-searchable transcriptions. Taft's young children were regular playmates of the Lincoln sons until the death of Willie Lincoln. Taft's older son, a physician, attended to the President the night he was shot. The diary—kept daily from January 1861 to April 1862 and irregularly through May 1865—had been in the possession of Taft's descendants since his death and had remained virtually unknown to scholars until it was donated to the Library of Congress in 2000. Taft's perceptions of homefront life in Washington, D.C., as the war progressed, descriptions of White House happenings, and account of the death of the President will add to the historical record. The site includes a 2,000-word biographical essay on Taft and links to 23 related sites.