Explore over 450 primary source documents related to the story of the Lone Woman of San Nicolas Island. 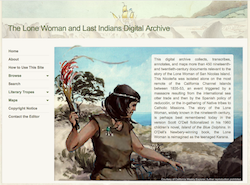 The Lone Woman and Last Indians Digital Archive includes over 450 primary source documents related to the story of the Lone Woman of San Nicolas Island off the coast of California. Isolated in the Channel Islands between 1835-53 after a violent massacre, the “Lone Woman” represents a myth that details the interactions between white settlers and indigenous peoples, as well as the consequences. This story is most commonly known today through Scott O’Dell’s 1960 novel, Island of the Blue Dolphins.

The site’s main goal is to “facilitate research on the Lone Woman as both a historical figure and as a mythic representation of the American Indian.” The archive includes newspaper articles, books, and journals and is searchable by publication, date, location, title, document group, and literary trope, such as “Noble Savage.” The Document Viewer allows users to view the primary source alongside a transcription and encoded literary tropes, locations, and people. Also included are interactive historical maps of the primary sources and data visualizations of the featured literary tropes across the collection and across time.

Many of the literary tropes, for example, concern myths and stereotypes of Native Americans that the Lone Woman stories propagated throughout the 19th century. Students could choose one trope and analyze related primary source documents, or study how one trope changed over time and influenced American and Native American identities.

The Lone Woman and Last Indians Digital Archive is a small database that offers a window into the effects of settler colonialism and power of myth-making and identity formation in American history.

Wright American Fiction, 1851-1875
Breaking the News in 1900
Godey's Lady's Book
All Disquiet on the Western Front
Women Artists of the American West
A-mouldering in the Grave