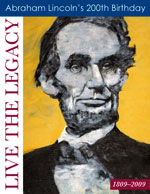 The calendar date of President Abraham Lincoln's 200th birthday on February 12, 2009, by no means circumscribes the exhibits, events, lectures, reenactments, ceremonies, and other tributes commemorating the significance of his life and his presidency. They continue throughout the year in libraries, schools, museums, towns, and cities.

The Clearinghouse will continue to highlight resources on Lincoln that are helpful in the K12 classroom: lesson plans, projects, and professional development opportunities of particular interest to educators. Please visit the Clearinghouse Digital Classroom section for information on events and online programs. The Clearinghouse Project Spotlight will also highlight Teaching American History (TAH) grants with modules related to teaching about Abraham Lincoln.

The most complete centralized information center is the Lincoln Bicentennial Commission, website of the Library of Congress, offering a comprehensive compendium of events, materials, information, and resources surrounding this event the Commission has labeled "a teachable moment." We particularly invite your attention to Resources for Teachers. The Learning About Lincoln section includes lesson plans and other classroom resources, reading lists, podcasts, ideas for community projects, and a calendar of professional development opportunities.

The Gilder Lehrman Institute of American History announced two podcasts by Lincoln historians Catherine Clinton and Andrew Delbanco. Clinton looks at how early tragedy helped prepare Lincoln for crises later in life; Delbanco examines how Americans have perceived Lincoln throughout history. Other resources from Gilder Lehrman are available on the Institute's Lincoln page.

On February 12, the Rosenbach Museum and Library in Philadelphia launched 21st Century Abe. This interactive website is an exploration of history, memory, and popular culture and invites visitors to find their own version of Abraham Lincoln, asking why we in the 21st century "are still obsessed with this 19th-century man?"

The project points out that Abraham Lincoln is prevalent in popular culture and asks what this popular culture has to do with the historical Abraham Lincoln. It's a collaborative venture. Visitors may upload their own images of the "found Abe." There's a portrait in cupcakes, videos, and contemporary artists' paintings and illustrations. You can add your own creation and design a poster to show what Abe means in the modern world. The site blog shares other representations of the "found Lincoln."

Lincoln at 200, a collaborative project from Chicago—the city where Lincoln was nominated for president—combines resources from the Abraham Lincoln Bicentennial Commission, the Chicago History Museum, and the Newberry Library.

Abraham Lincoln and the West, 18091860 is a web-only exhibition that takes its organizing structure from Lincoln's 1860 autobiography, written to introduce him to voters. The exhibit looks at America between 1809 and 1860, focusing on changes in transportation, commerce, political alliances, and growing divisions on the question of slavery.

The Fiery Trial: Abraham Lincoln and the Civil War is a digital version of a temporary exhibition at Chicago History Museum (October 10, 2009 to April 4, 2010). This exhibit examines the course of Lincoln's ideological and political transformations as president from a moderate Republican opposed to slavery yet willing to accept it to maintain the Union to becoming the author of the Emancipation Proclamation—a document that changed the course of American citizenship and democracy. The exhibit also looks at how time and memory alter the historic perception of Lincoln.

The Gilder Lehrman Institute publishes a Lincoln page offering highlights of current events about Abraham Lincoln, bibliographies of prize-winning books, links to online exhibitions on Lincoln and the Civil War, and audio podcasts and videos of prominent historians focusing on themes and events in the life of Abraham Lincoln.