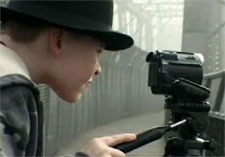 President Obama's new Summer of Service Initiative—United We Serve—calls on Americans to make community service part of their daily lives, and on June 25, The Journey Through Hallowed Ground Partnership (JTHG) at Harpers Ferry National Historic Park unveiled a ground-breaking service-learning program in keeping with this initiative. Seventy students from Harpers Ferry Middle School launched their own historic research and preservation project: Of the Student, By the Student, For the Student. These students created six mini-movies examining the October 6, 1859, John Brown raid on the Harpers Ferry arsenal. These videos are now on view at the historic site and online to help students from around the globe connect to that history.

Beginning in January, the middle school students conducted research, then wrote, edited, and designed their project. The use of iPods, cell phones, and YouTube engaged the students, and the project promoted both leadership qualities, collaborative learning, and critical thinking skills. As the project introductory video explains, "It's critical for students to be connected to stories in their own backyard . . . and technology immediately attracted them."

What Happened at Harpers Ferry?

John Brown's raid was polarizing, and historians continue to reexamine its meaning and impact. In researching and developing their project, students explored these controversial interpretations, examining contradictory primary sources and interviewing historians and current residents of the area. They explored the contours of the narrative: John Brown and 21 supporters (both black and white and including two of his sons) planned to seize the arms stored at the arsenal, then retreat into the Allegheny Mountains and fortify a base to encourage, assist, and defend additional slave insurrections and escapes.

Brown was an ardent and militant abolitionist, and in 1837 he declared, "Here, before God, in the presence of these witnesses, I consecrate my life to the destruction of slavery." He aided fugitive slaves, worked with free blacks to resist the Fugitive Slave Law, and fought against proslavery forces in the battles of Bleeding Kansas leading the Pottawatomie Massacre in 1856—his response to pro-slavery attacks on settlers in Lawrence.

After Harpers Ferry, Brown envisioned an interracial, utopian community in the mountains with shared labor, shared resources, and shared property. It was a tall order for the small band of 22 men and it failed—not surprisingly in view of the numbers of civilians and members of the armed forces of the U.S government arrayed against Brown and his men. Brown was tried and executed for treason, murder, and fomenting insurrection.

Madman or idealist? Fanatic or martyr?

The aftermath of Harpers Ferry reverberated throughout the nation, and the middle school students explored various responses to define their own opinions. Abolitionists called Brown a martyr and grieved at his execution; proslavery southerners believed him a madman, symbolic of the North's egregious intentions toward the south. Moderate abolitionists rejected his violent tactics, but supported his ideals. Abraham Lincoln called him a "misguided fanatic."

The student's research led most to conclude that John Brown was neither good nor bad, but a man committed to a cause, and their videos chart the processes and the path toward their conclusions. They also demonstrate that a useful historical argument isn't confined to text-based narrative: rap, music, reenactment and dance are among other interpretive methods. Presentations such as John Brown: Children of the Raid are among the videos that demonstrates the unique perspectives of historical inquiry students brought to their examination of primary sources (with background music from the Harpers Ferry Middle School Concert Band).

As part of the project, students wrote a letter to Malia and Sacha Obama, daughters of President Barack Obama, explaining their project and inviting them to the project opening. Don't miss press releases, process videos, and other background materials about the project.

Of the Student, By the Student, For the Student is the outcome of a variety of collaborative efforts to make history relevant to young people. It is a program created, developed, and sponsored by The Journey Through Hallowed Ground Partnership created at the request of the Advisory Council on Historic Preservation (ACHP) and Harpers Ferry National Historic Park.