Forty Years Ago: One Giant Leap for Mankind 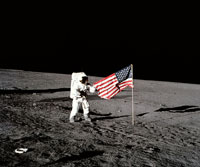 On July 20, 1969, Apollo 11 astronauts became the first men to land on the moon, and Neil Armstrong, the first man to step off the lunar module to broadcast to the world, "That's one small step for man; one giant leap for mankind."

Families crowded around television sets, mesmerized by the event and the immediacy of the news coverage. "We were really very privileged," Neil Armstrong later stated, "to live in that thin slice of history where we changed how man looks at himself and what he might become and where he might go."

The moon landing represented an upbeat focal point amid the social and political turmoil of the late 1960s. It also marked the end of the space race between the two Cold War giants, the United States and the Soviet Union. The moon walk was a technological and political victory for America, the Soviet Union was not prepared to catch up, and with that victory, Cold War priorities shifted in both countries. Only 12 men have walked on the moon—the last in 1972.

The Kennedy Library will recreate the lunar landing in real time.
Resources

Online resources support teaching about the moon landing and the space program as political history, cultural history, and the history of science and technology.

Want to experience the moon landing in real time? The John Kennedy Presidential Library and Museum website WeChooseTheMoon will recreate the history of the Apollo 11 lunar mission, inviting people to share the liftoff and voyage through social networking tools. The project is currently in Stage 1: Prelaunch. Liftoff is July 16 at 9:32 am, exactly 40 years after the original launch. High-quality 3-D animations, photographs and videos from the archives, twitter feeds, and thousands of pages of declassified mission documents accompany the event.

The Library has posted historic film footage with President Kennedy speaking about the priority of the moon landing, copies of correspondence, and speeches related to the space program.

President Johnson supported the space program from its earliest days propelled by the Soviet achievement in 1957—Sputnik.

In his memoir, Johnson reminisced, "As I watched that vehicle rise on its pillar of flame, seeing sky and earth and rocket all tied together in one majestic and unforgettable panorama, I could not help remembering that earlier vigil, twelve years before, when we strained to see the Soviet Sputnik orbiting overhead. In the short span of time between those two events, we wrote a story that will be told for centuries to come."

In The New York Times, author John Noble Wilford's article, On Hand for Space History, as Superpowers Spar, looks at the moon landing as history, memory, and culture, reviewing the Cold War, the political turmoil of 1968, and the history of the space program and remembering his own experience and perceptions.

The Smithsonian invites the public to help document the moon landing.

The National Aeronautics and Space Administration (NASA) provides a wealth of materials about the moon landing and other space flights. The Apollo Site offers historic films and images, interactive exploration of the Apollo lunar module and landing site, and key Apollo primary source documents.

The Smithsonian National Air and Space Museum commemorates the anniversary with online exhibits and activities including an interactive Apollo timeline, videos and podcasts, and images. The Smithsonian is asking for public help in documenting the moon landing through comments on artifacts from the museum collections and sharing personal stories and opinions about the space program.

For current information about the space program, visit the NASA Kennedy Space Center site for multimedia presentations, blogs, and exhibits. NASA's YouTube channel features videos lasting from a few seconds to an hour demonstrating and explaining the space program.