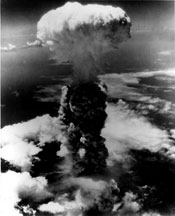 On August 6, 1945, the United States dropped the first atomic bomb used in warfare on Hiroshima, Japan. On August 9, 1945, the second atomic bomb struck Nagasaki. This age of nuclear warfare began less than a month after the first test of the atomic bomb in the New Mexican desert, and Robert Oppenheimer, leader of the Manhattan Project, later recalled, "There floated through my mind a line from the Bhagavad-Gita in which Krishna is trying to persuade the Prince that he should do his duty: 'I am become death: the destroyer of worlds.'"

The decision to use atomic bombs against Japan is considered among the most controversial decisions in military history. Multifaceted arguments examining the causes and effects of that decision began before the bombs fell, continued in the immediate aftermath, and have not yet ended, and we probe them from the perspectives of military, political, social, and cultural history. Was the bombing justified? Did it hasten the end of the war?

Primary and secondary educational resources support an emphasis on multiple perspectives and historical thinking in approaching units about Hiroshima and Nagasaki. The following suggestions are directed toward high-school and some middle-school classrooms.

Hot Topics: Hiroshima on the History News Network gives educators an overview of historiography and arguments behind the bombing. Among them, Peter Kuznick, Associate Professor of History and Director of the Nuclear Studies Institute at American University, addresses past and present perspectives in The Decision to Risk the Future . . . Harry Truman, the Atomic Bomb and the Apocalyptic Narrative. Sean Malloy, assistant professor of history at the University of California, Merced, Four Days in May . . . Henry L. Stimson and the Decision to Use the Atomic Bomb follows the political rationale and chronology leading to Hiroshima.

For students, Steven Mintz's Digital History essay, The Controversy Continues in the unit America at War: World War II, brings the discussion into the present day using argument about the presentation of an Enola Gay exhibit at the Smithsonian as a starting point to examine different points of view about Hiroshima and Nagasaki.

Help students become familiar with the arguments and look for their own conclusions through materials digitized at the Truman Library. A special collection focuses on The Decision to Drop the Bomb and includes documents totaling almost 600 pages covering the years 1945-1964. Secondary source materials include an online version of Truman and the Bomb: A Documentary History, edited by Robert Ferrill. Among the primary source documents, the press release by Henry Stimson of August 6, 1945 includes an accompanying Lesson Plan for exploring the text and implications of that release.

The Gilder Lehrman Institute teachers' module on World War II incorporates a lesson plan on the Manhattan Project and a link to Was it Necessary?, a site highlighting this question and related primary documents exploring it.

The New York Times provides a lesson plan on He's the Bomb! with a look at Hiroshima 60 years later.

Guided searches yield resources on YouTube and at the Library of Congress.

YouTube offers various historical footage of the bombing as well, but teachers will want to carefully screen videos and download them to a flash drive for accuracy and for age-appropriate coverage. And at the Library of Congress, a selected search of cultural collections and the Prints and Photographs online catalog also yields a multitude of photographs of the aftermath of the bombing and of further text-based resources.

What About the Present?

The Hiroshima Peace Memorial Museum is a multifaceted look at the bombing and destructive effects on individuals and on the world. The museum presents a message of peace through a look at the horrors of war through survivor histories and exhibits on Hiroshima City and Japan before and after the atomic bombing. The museum directs many online materials toward elementary school ages, and is also well worth a visit from all ages for a conversation about how we remember, interpret, and use our historical past.

As Ronald Takaki writes in The Lessons of Hiroshima, "The history of this world-shattering event offers us lessons on war, race, leadership, reason, judgment, and the importance of cross-cultural understanding. Those who do not know history, a philosopher warned, will be doomed to repeat it. Hiroshima is a past that is not even past, and we ignore it at our peril."