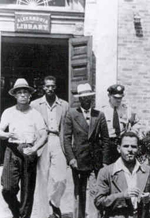 A 1939 library sit-in in Alexandria, VA, is often called "the most famous civil rights protest you never heard of." And recently, third-graders from Samuel W. Tucker Elementary in Alexandria explored this episode in the history of civil rights in their own backyard.

They shared their findings to a standing-room-only audience at the Barrett Branch Library where the sit-in took place.

The Alexandria Library stands as a testament to one of the first challenges to Plessy vs. Ferguson. It began when George Wilson, a retired Army Sergeant, was persuaded by 26-year old Samuel Wilbert Tucker to challenge the status quo and apply for a library card at the Alexandria Library. The sit-in didn't desegregate Alexandria libraries, but it did lead to construction of a library branch for African Americans completed in 1940.

In 1939, the educational climate for African Americans in Virginia was abysmal.

The Alexandria, VA, Black History Museum bills this action as The Nation's First Sit-In in the lesson plan America's First Sit-Down Strike: The 1939 Alexandria Library Sit-In that emphasizes teaching with historic sites, exploration of primary source documents, and critical thinking. The introduction to the lesson plans places the sit-in in historic context, highlighting the educational climate for African Americans at the time. As Tucker recalled, "I finished the eighth grade in Alexandria and the state of Virginia said that was to be all the education I got." (Tucker was an attorney at the time of the sit-in; he had attended Howard University, graduated in 1933, and passed the Virginia Bar exam that same year.)

The eight-year-olds who recreated their research at the Library met the relatives of five African American men jailed the day of the protest as well as Frederick Day, the 91-year-old former chair of Alexandria's Board of Education who was also the first African American public school board chair in Virginia.

Day recalled, "A lot of people come to my hometown and think that it was like this years ago, but they are far wrong. It was a typical Southern port town, with all the problems of the deep South."

Diana Laufenberg on Teaching History Thematically
From the Atlantic Monthly: What Makes a Great Teacher?
The Electronic Schoolhouse/LaEscuela Electronica: A Bilingual History Education Resource
Snips and Shoes and Sealing Wax: New Publications and Websites
Michael Yell Motivates Students with the Mystery Strategy
Maps: They're Not Just for Geography Any More