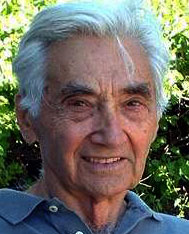 A couple of years ago, an undergraduate research assistant came into the computer room at the Center for History and New Media at George Mason University and sat down to work. He was a computer guy, a programmer, a student who spoke IT and unravelled the backend of one of the Center's largest digital history projects. He did well in required humanities courses, but they weren't his favorites. This day, he was enthusiastic, palpably—and unusually—ready to talk. He'd just read Howard Zinn's A People's History. He didn't know history could be like that, he explained.

That's what Howard Zinn did to people.

Howard Zinn, historian, died at the age of 88 on January 27, 2010. Best-known among his many publications, the book A People's History of the United States, 1492-Present—has sold over 2 million copies since it was first published in 1980.

"The book bears the same relation to traditional texts as a photographic negative does to a print: the areas of darkness and light have been reversed." wrote Eric Foner in his 1980 New York Times review of A People's History,

Only a few weeks ago, Zinn's long-time friend and neighbor, actor Matt Damon fulfilled his own life-long dream and brought Zinn's voices of the people to life on the History Channel. But that wasn't for Zinn; that was for us. To remind us that we are the ones who are the doers and makers of history, that our choices and actions matter. That was Zinn's message, written clearly in the first chapter of A People's History, and it bears repeating again and again.

Watch this broadcast with Bill Moyers on December 11. "His message goes to fundamental questions about the allocation of power," Moyers explains. (Transcript and podcast are also available).

Learn more about his life at work through the American Historical Association appreciation, Howard Zinn, Paradigmatic People’s Historian, Dies at 87.

Read and watch tributes, excerpts from his writing, and acknowledgement of his lifework at Democracy Now. Noam Chomsky, Alace Walker, Naomi Klein and Anthon Arnove are among those who recount the remarkable lifestory of an educator who lived what he taught. "...the phrase of his that always rings in my mind is his reverence for and his detailed study of what he called “the countless small actions of unknown people” that lead to those great moments that enter the historical record," recounts Chomsky.

And visit a site dedicated to providing resources for teachers to bring a people’s history to middle and high school classrooms, Teaching a People's History, the Zinn Education Project. The site also includes Howard Zinn’s keynote speech at the 2008 National Council for the Social Studies Conference on teaching history. And check Teaching for Change, providing teachers and parents with the tools to transform schools into centers of justice where students learn to read, write and change the world.

An Ear for the Past: The National Jukebox
Trickle or Tsunami?: Getting Involved with the Common Core Standards
ROTFLOL?* President John Quincy Adams Twittered?
Thinking Like a Historian: Rethinking History Instruction
History Education News 06: Analyzing Images
236 Years Since the Boston Tea Party