Stand Up and Be Counted: Teaching with the Census 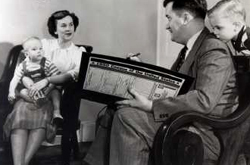 The first U.S. census took place in August 1790, a little more than a year after the inauguration of President Washington. Census takers—marshals of U.S. judicial districts—visited every household and posted census results in every jurisdiction "for the inspection of all concerned..."

What prompted that first American census? In 1790, the major purpose was proportional representation in Congress, and its implementation was the direct result of Article 1, Section 2 of The Constitution of the United States. "[An] Enumeration shall be made within three Years after the first Meeting of the Congress of the United States, and within every subsequent Term of ten Years, in such Manner as they shall by Law direct."

"We can't move forward until you mail it back," is the slogan of the 2010 decennial census, referring to the hundreds of thousands of forms mailed to households across the nation earlier this year for the national headcount. But to tabulate those who haven't "mailed it back," more than 600,000 trained census takers will fan across neighborhoods, communities, towns, and cities in May to enumerate the yet-uncounted.

Today, the Census not only defines Congressional representation, but collected data strongly influences how money is spent for schools, health care, roads, and other governmentally-funded programs. The Bureau of the Census is a statistical clearinghouse for the country, a repository that coordinates, consolidates, and disseminates layers and combinations of demographic and economic data used to define our national identity and to determine national directions.

Teaching about the Census

So what do all those fact and figures mean, and how can we teach students to use them?

Census in Schools from the U.S. Census Bureau provides materials for teachers, kids and teens to help understand and utilize materials and data. Teaching Resources include Lesson Plans distributed for Grades K-2, 3-4, 5-8, and 9-12. Note that these lesson plans are straightforward informational pieces about how the census is conducted and the official purposes of census data. The PDF, What High School Teachers Need to Know, a handbook about using American Community Survey data is perhaps more useful for engaging students in the practical uses of census material and its applications to projects and programs.

The New York Times Learning Network offers Making Sense of the Census: Ideas For Classes Across the Curriculum with lesson plans and activities for exploring the role of the census and its implications.

History Tech a blog from a Kansas educator, provides an extensive list of teaching and informational resources.

The census has always included questions about racial and ethnic classification. Theoretically determined by contemporary national priorities, these questions also reflect cultural and social paradigms of the time in which they're defined. Across the decades, these classifications are sometimes ambivalent, sometimes controversial.

Look at questions 8 and 9 in the 2010 Census form, for example. This decennial, many are offended by the continuing inclusion of the term Negro to define African Americans. In the New York Times, Census chief Robert Groves explains the rationale, yet Apologizes for ‘Negro’ Category. The NAACP Legal Defense Fund responds to the issue as well with a brief history of census terminology and ensuing comments summarize the controversy. (Take a stab at a quiz on teachinghistory.org: Knock, Knock. . . Who Lives Here? to see if you can guess when different census categories appeared.)

Annenberg Media offers an online workshop combining video, primary sources, lectures and classroom activities around the topic The Census: Who We Think We Are. The workshop focuses on the census and racial and ethnic identity.

This year, some political groups have called for a census boycott. Many fear that information given in response to census questions leads to excessive government surveillance and invasion of privacy. That fear exists in tension with an awareness that the census boycotts backfire—that failure to be counted can result in reduced federal financing and reduced representation for those very ideas boycotts are intended to promote.

Laws do exist, however, to safeguard use of personal census information. Title 13, the law that protects Personally Identifiable Information (PII) from non-census use was tested in 1951 when President Harry Truman temporarily moved out of the White House during renovations. The Secret Service fought to gain access to census information for the security of the President. They were unsuccessful. Title 13 held and the information remained secure, even from the President. PII only becomes accessible to the public (or other agencies) after 72 years.

A simple search on at teachinghistory.org using the term census yields numerous and varied materials including the following.

Featured Website Reviews include Selected Historical Decennial Census Population and Housing Counts a resource for more than 40 historical census reports, including PDFs of decennial reports dating back to 1790 and extensive histories of census questionnaires.

A September 2009 blog post on Hispanic Heritage Month links to census information on the Hispanic American population in the United States.

Lesson Plan Reviews lead to The First Census: America in 1790, a module for grades 11-12. Students examine secondary sources and analyze digital maps of census data from 1790 to explore the politics behind the Great Compromise and the Three Fifths Compromise at the Constitutional Convention of 1787.