Home Sales During the Great Depression 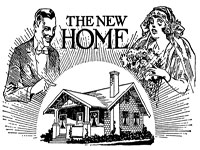 How can I find out about the number of home sales per year during the Great Depression?

Plenty of information about the housing market during the Depression has been collected and is easily available. Some of it is online and some of it is contained in Depression-era government publications. Nevertheless, statistics on the number of U.S. home sales during that time are not easily available, at least in a comprehensive, aggregated form.

Sales Figures, Then and Now

Nowadays, the housing market is primarily tracked through three reports:

These first two reports describe housing sales, which is a demand-side indicator of the market.

Some figures on housing construction and on numbers and values of mortgages are available as far back as the Depression, but not comprehensively (the Census Bureau, for example, did not start collecting data on single family housing starts until 1959). Walter Molony of the Public Affairs Office of the National Association of Realtors points out that NAR did not begin data collection on existing-home sales until 1968 and that collection of data on new-home sales by the U.S. Census Bureau did not begin until 1963. Consequently, national figures on housing sales, comparable to those available about today's housing market, do not exist for the period of the Great Depression. However, local real estate boards and chambers of commerce sometimes collected this information locally or regionally even as far back as the Depression, so, depending on your area of interest, you might check there.

Other Housing Market Statistics from the Depression Era

The Census Bureau also makes available figures on housing vacancies and, from 1900, rates of homeownership (based on federal census figures) online. The homeownership rate declined from 1900 to 1920. During the 1920s, it increased, but then during the Depression it dropped again, and was at about 44 percent (percentage of heads of households who owned their homes) by 1940. After World War II, the rate increased dramatically, recently approaching 70 percent.

The housing market in the 1930s was fundamentally different than it is today.

This data, however, was constructed, rather than collected, and, while valuable, is, as Walter Molony of NAR puts it, "academic speculation based on assumptions and modeling using sources such as the value of the dollar, or the average price of newspaper listings in Washington, D.C."

Evolution of the Housing Market

The housing market in the 1930s was fundamentally different than it is today. During the Depression, the federal government became a significant actor in the housing market (as it did in other sectors of the economy). The National Housing Act of 1934 encouraged buyer-friendly mortgages: Before this, mortgages were typically 10-year loans with 50 percent downpayments. The Federal Housing Administration and its FHA-insured loans also increased the availability of mortgages.

After World War II, the G.I. Bill (the Servicemen's Readjustment Act of 1944) increased the availability of 30-year fixed-rate mortgages. Realtors think of this as the beginning of the modern real estate era. The government began to act in the housing market through Fannie Mae (the Federal National Mortgage Association, established in 1938 as part of the New Deal) and, since 1968, Freddie Mac (the Federal Home Mortgage Corporation). Their role in the housing market, to put it very briefly, has evolved over time.

During the Depression, the federal government also intervened in the housing market by eventually dominating home building itself, both public housing and then, in the defense build-up toward the end of the 1930s, "war housing" units in areas near military bases and industrial plants. Privately funded housing construction fell by 80 percent between 1929 and 1933, and the federal government expanded its role in housing construction.

Because of this role, the government collected data on the construction of housing units. It also tracked assumed mortgages because of its involvement in insuring loans. These figures can be found in the Housing Yearbook, published annually from 1935 to 1944 by the National Association of Housing and Redevelopment Officials, with sections written by the heads of the government housing agencies who described how they implemented government housing policies and the challenges they faced.

A good place to find statistics and tables on the U.S. housing market during the Depression, as well as a discussion of the underlying nature of that market and how it has changed over time, is the U.S. Commerce Department's five-volume Historical Statistics of the United States. The Millennial Edition is available online and is fully searchable and downloadable.

Documenting Our Past: The Teenie Harris Archive Project
Crime and Justice Data Online
Nixon Tapes
The 1906 San Francisco Earthquake and Fire
Back to School
Can You Recommend Three Texts on Historiography?