The 4th Estate as the 4th Branch 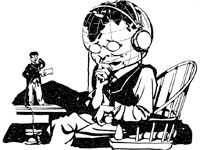 Why is it that, while the media is referred to many times as the 4th branch of government, it is not explicitly stated as such? Is this something that would be or has been up for consideration? What arguments would favor or oppose this amendment to the body of our Constitution?

Calling the media the "4th branch of government" is a rhetorical device, not a serious statement of fact. The point is to emphasize that the press is not a mere passive reporter of the facts, but a powerful actor in the political realm.

Calling it "the 4th branch" not only emphasizes the amount of power it wields, but is often meant to suggest that that power is not under the control of the people in the same way that their elected representatives are. The implication is that it acts as a shadow government, unaccountable to the people, but is instead beholden to special interests of one sort or another, or that the press's supposed separation from the government is largely an illusion. The corollary is that the press sometimes menaces rather than protects, or controls rather than serves, the public.

The Phrase "4th Branch of Government"

The "4th branch of government" is a phrase that appears to have first surfaced among critics of FDR's New Deal in the 1930s. It referred not to the press, but to the collection of new Federal regulatory agencies with top officials appointed by the Executive Branch. Their function was quasi-judicial, and they were not directly accountable to the people.

Identifying the "4th branch of government" as the press came a decade or so later. Hartford Courant editor Herbert Brucker, in his 1949 book, Freedom of Information, devoted some ink to it. He explicitly equated "the 4th Estate" (another, older phrase often applied to the press, which has its own linguistic history derived from British and French politics) with "the 4th branch of government."

Journalist Douglass Cater entitled his 1959 book on the practical relationship between the government and the press, The Fourth Branch of Government. Both authors were convinced that, insofar as the press did act as a true political player (rather than an unbiased observer of politics), it corrupted itself and went astray from its primary responsibility—to convey important information and to act as a nonpartisan watchdog for the public against all trespassers on their rights.

Lately, some political writers have used the phrase, "the 4th branch of government," to mean the voters' power to form law directly through petition or referendum, as in California.

Freedom of the Press

The 1st Amendment of the Constitution says, “Congress shall make no law ... abridging the freedom ... of the press.” The Constitution establishes a government with three branches, but it does not establish a press or a media. What it does do is prohibit the government from trying to control what people say, either in the press (and by extension in other forms of media) or outside the press.

The 1st Amendment states the consequence of that fact: Congress cannot limit freedom of speech. The Constitution recognizes the press's freedom as fundamental and prevents the government from infringing on it.

Another way of demonstrating this: The government, barring a few exceptional situations, has not put itself in the business of funding the press, much less actually running a news organization (rather than a public information office). One exception is the grant money that partially funds the Corporation for Public Broadcasting and National Public Radio (and fully funds international broadcasting entities such as Radio Free Europe, Radio Liberty, and Radio Free Asia).

Another exception is Voice of America, the government agency that broadcasts radio and television abroad. VOA is prohibited by the Smith-Mundt Act, however, from disseminating its programming directly to the American people. This was partly out of fear that an administration would find it a useful tool for selling itself to its own constituents and thereby unfairly consolidating its own power against its political opposition.

Incorporating the press into the government would make the media more accountable in some sense for what it says and does, and would make it less dependent on large commercial interests for success. It would likely make the media more careful and guarded about what it said. No matter what your political perspective, it is not difficult to think of instances where that would have been a good thing.

Politicians and journalists have recently talked about giving government subsidies to news organizations suffering from a dwindling subscriber base and shrinking audience or advertising revenues. This idea they justify under the notion that the press or the media is a kind of public service or utility and is valuable to the general welfare of the country. This would be an of extension of the idea of the electromagnetic broadcast spectrum as a public resource that is allocated and protected by the Federal Communications Commission.

Potential Downside of Making the Press a Separate Branch of Government

There are many countries in the world where this is the model. Many of them have media that are largely or even exclusively government-run (or at least government-funded). Despite the occasional desire of politicians or government bureaucracies to control a media that annoys or criticizes, the Constitutional guarantees of freedom of speech and of the press have largely prevented such action here.

Exceptions to the Freedom of the Press

By law, the press is limited in its content when such content would be libelous, obscene, seditious (leading to "imminent lawless action"), or would threaten national security or the public safety. Restrictions on "hate speech" also limit the freedom of the media, as do copyright laws. It has been along the border of these limitations that skirmishes between the press and the government have been fought for nearly the entire history of the U.S.

Such skirmishes began in earnest with the passage of the Sedition Act of 1798, which, for a time, made it an offense "To write, print, utter or publish, or cause it to be done, or assist in it, any false, scandalous, and malicious writing against the government of the United States, or either House of Congress, or the President, with intent to defame, or bring either into contempt or disrepute, or to excite against either the hatred of the people of the United States, or to stir up sedition, or to excite unlawful combinations against the government, or to resist it, or to aid or encourage hostile designs of foreign nations."

Nevertheless, it is a sign of how little support the Constitution gave to the government to define for itself the content of what the press could publish that 1st Amendment cases involving questions of the freedom of the press were decided in what historian Lucas Powe calls a "haphazard" fashion until the 1964 Supreme Court decision of The New York Times v. Sullivan, which clarified what constituted libel and what did not.

Herbert Brucker. Freedom of Information. New York: Macmillan, 1949, pp. 9-16.
Douglass Cater. The Fourth Branch of Government. Boston: Houghton Mifflin, 1959.
Lucas A. Powe, Jr. The Fourth Estate and the Constitution: Freedom of the Press in America. Berkeley: University of California Press, 1991.
Lyrissa B. Lidsky and R. George Wright. Freedom of the Press: A Reference Guide to the United States Constitution. Westport, CT: Praeger, 2004.
Text of the Sedition Act of 1798.