Which Native American Tribes Allied Themselves with the French? 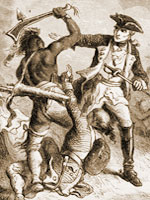 Which Native American tribe was the main ally of the French during the French and Indian War? I am finding different answers.

The historians cited below, some of whom are leading figures in the new Indian history movement, have tried with respect to the Seven Years' War (called the French and Indian War in the North American colonies) to uncover Native American perspectives in order to elucidate the actions and significances of the war more fully than previous scholarship had accomplished. They have merged methods and purviews of military, political, social, and cultural history in efforts to adequately account for the war's complicated causes, development, and consequences.

A Scale of Reliability

Francis Jennings has categorized France's wartime Indian allies in terms of their reliability. So-called "domesticated" Indians, who converted to Catholicism, left their tribes, and settled in French missions, were considered the most reliable. Potawatomis, Ojibwas, Ottawas, and other Indian groups who traveled long distances to join the fight were perceived as the next most reliable, as they could be counted on to remain after a battle and hold newly won territory rather than embark right away on the long trip home.

During the first four years of the war, however, Indian allies from the Ohio Valley region, most prominently the Delawares and Shawnees, became France's most important allies. They "unenthusiastically came to terms with the French," Richard White relates, when war began between the two European empires and especially after English General Edward Braddock failed to capture Fort Duquesne at present-day Pittsburgh. In that battle, most of France's Indian allies were Ottawas, Mississaugas, Wyandots, and Potawatomis fighting for captives and booty, according to Fred Anderson. After Braddock's defeat, the Ohio Indians, rebuffed by the arrogance of the British and fearing attack by the other tribes allied with the French, joined the latter in large numbers. Until they reached a separate peace with England in 1758, these Ohio Indians conducted devastating raids on frontier settlements in Virginia, Maryland, and Pennsylvania.

The Delawares and Shawnees became France's most important allies.

Shawnees and Delawares, originally "dependents" of the Iroquois, had migrated from Pennsylvania to the upper Ohio Valley during the second quarter of the 18th century as did numerous Indian peoples from other areas. Unlike the others, however, the groups arriving from the east came as "village fragments, families, even individual hunters," White notes, rather than as whole villages or tribes. They formed multiethnic villages, what White calls "the first republics," in lands claimed by both England and France, and were "trying to establish some basis for collective identity and action for the first time as the events of the war began to unfold," Eric Hinderaker relates. The Ohio Indians sought to "use the French to defeat the British," White contends, with the understanding that afterward, in the words of a Delaware, "we can drive away the French when we please."

In October 1758, the Ohio Indians reached a peace agreement with England stipulating that the British would relinquish claims to their lands on the Ohio, an agreement on which the British subsequently reneged. Without the support of the Ohio Indians, the French abandoned Fort Duquesne to the British, "a pivotal moment in American history," James H. Merrell has written. The Catholic Indians of the St. Lawrence missions remained allies of the French as the war continued, until the late summer of 1760, when the mission Indians ended their support of the French, and the latter shortly thereafter surrendered to the British. War between France and England, concluded in North America, continued elsewhere until the Treaty of Paris was signed in 1763.